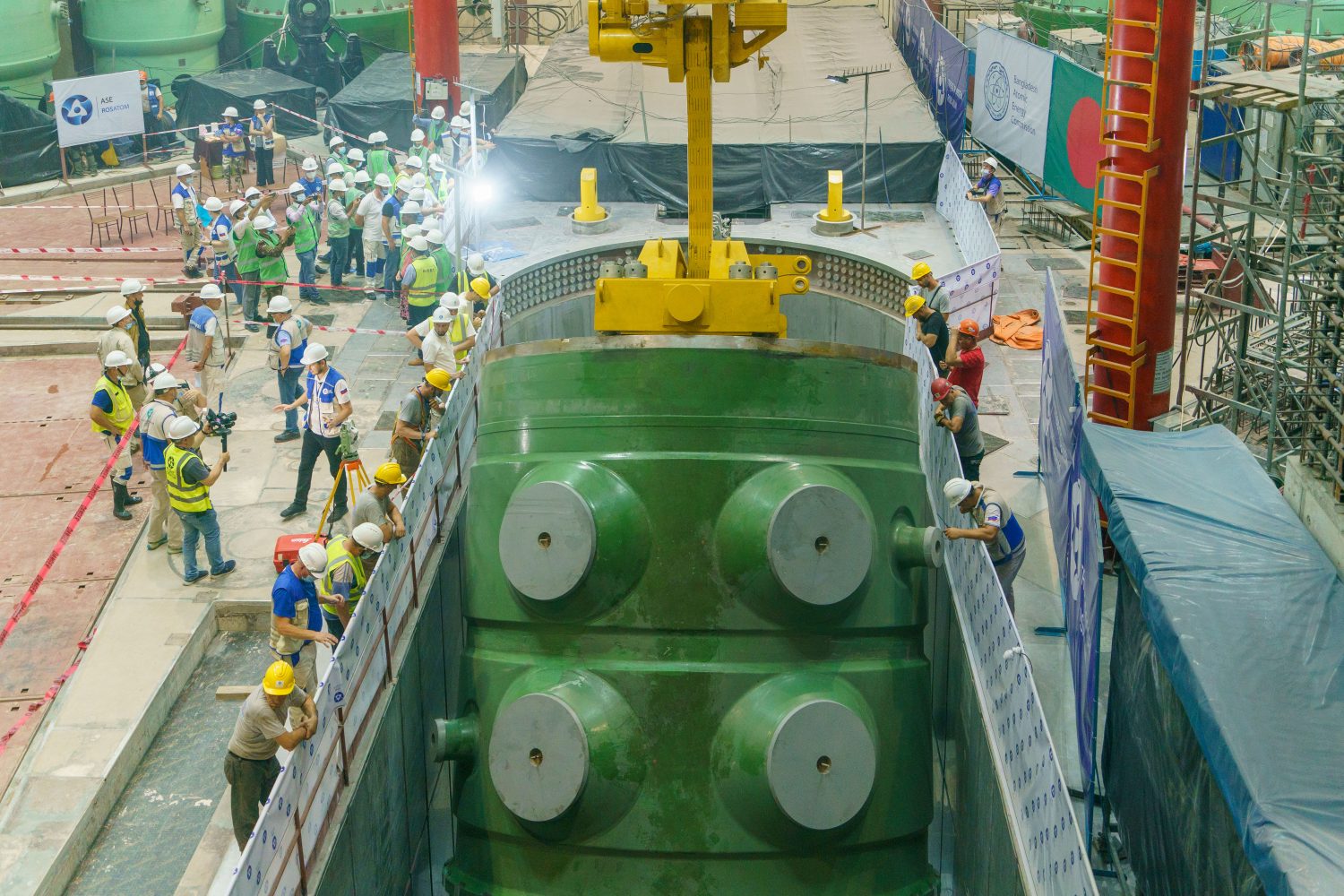 Alexey Likhachev arrived at the site on a working visit. He emphasized the significance of the completed RPV installation and underlined that the well-coordinated work of Rosatom engineers and their colleagues from Bangladesh was bringing the country closer to its goal of nuclear power industry development. “Today, the Rooppur NPP has passed an important milestone scheduled for 2021 — ​the reactor pressure vessel of Unit 1 has been installed in its permanent position. High qualification of the employees and thorough preparation ensured that the work was done with a pinpoint precision. The Rooppur project carried out in Bangladesh has accumulated the best Russian practices and dozens of years of experience and scientific research,” Alexey Likhachev pointed out. He stressed that the unique combination of active and passive safety systems of the power units would ensure safe operation of the power plant and guarantee the designed level of electricity generation.

Prime Minister Sheikh Hasina Wazed joined the reactor pressure vessel installation ceremony from Ganabhaban via video link. Speaking at the ceremony, the Prime Minister said, “Today is a day of joy and pride for us as the reactor pressure vessel is being set up at Unit 1 of the Rooppur Nuclear Power Plant. This confirms our strong presence in the nuclear world as far as peaceful uses of nuclear technology are concerned.” She thanked Russia for its support of the Rooppur project. “Earning knowledge about the most modern technology like nuclear power by our young generation will help them acquire special qualifications and skills,” Sheikh Hasina said.

The installation of the reactor pressure vessel started on September 14, 2021. During the next two weeks, the reactor was moved via the transportation airlock inside the reactor containment building. Then the 334‑ton structure was installed into its permanent position using a polar crane, with a tolerance of one tenth of a millimeter.

After the installation was completed, Rosatom’s Director General and the Prime Minister of Bangladesh continued discussions at a closed meeting during which the matters of strategic cooperation between Rosatom and Bangladesh were raised. 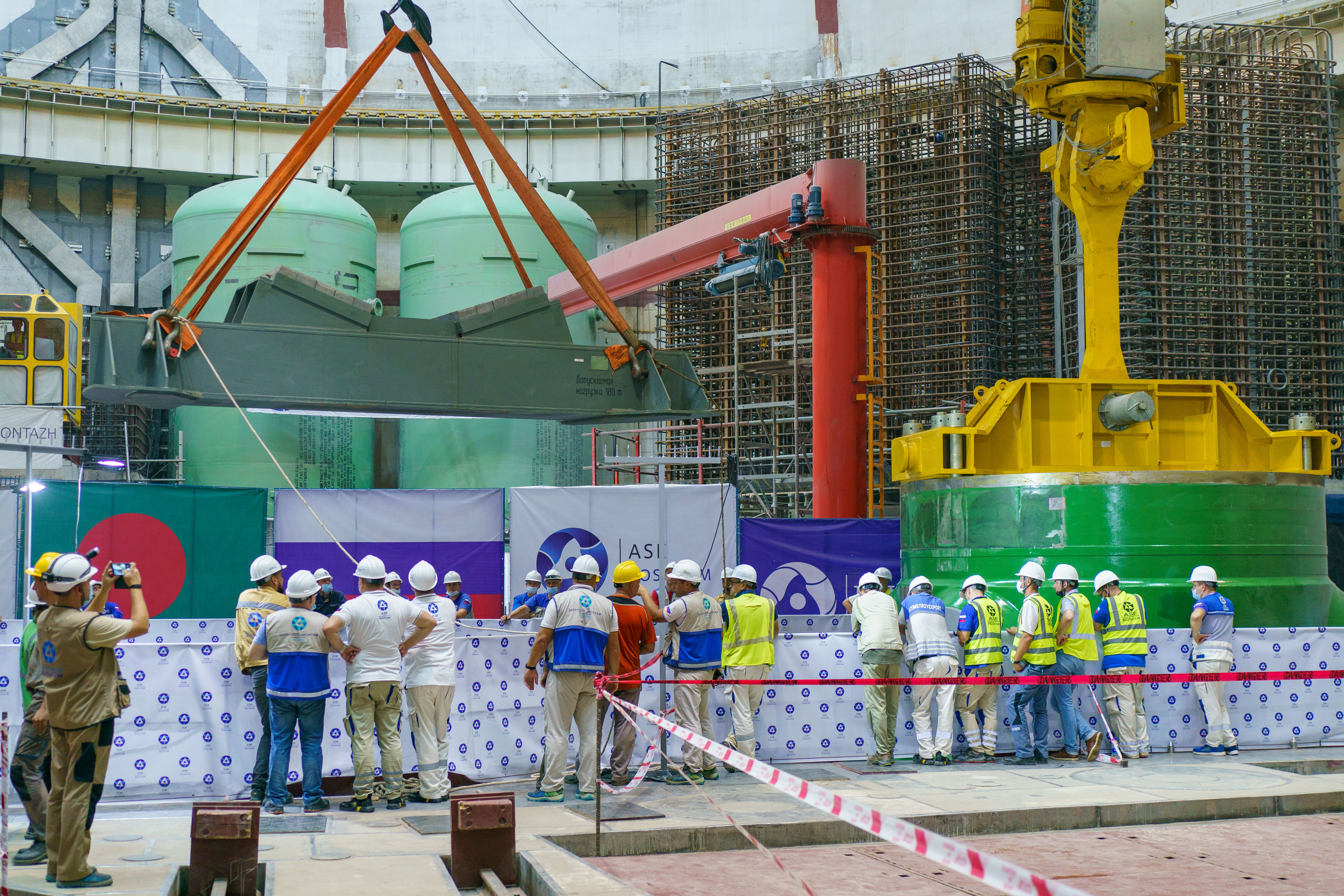 Extensive training of the staff for the nuclear power plant is running parallel to the construction. As explained by Rosatom representatives at the seminar held in mid-­September in Ishwardi, at least 2,500 local professionals will be involved in the nuclear plant project. Around 1,500 Bangladeshis will be trained in nuclear-­related professions. So far, 284 Bangladesh nationals have been sent to Russia to study; 75 of them have returned after they completed the first phase of the training program. Every year, the Russian government offers grants to 20 to 30 students from Bangladesh to receive higher education in nuclear engineering at the National Nuclear Research University (MEPhI), a leading Russian educational institution.

According to experts, qualified staff is critical for the Rooppur project. “We need nearly 5,000 qualified engineers to operate the Rooppur NPP on a daily basis. In partnership with Rosatom, we launched a training program to have a sufficient number of professionals by the target date,” said the former chairman of the Bangladesh Atomic Energy Commission (BAEC), Shafiqul Islam Bhuiyan, at the seminar “Rooppur NPP Contribution to Sustainable Development of Bangladesh.” He called on the government of Bangladesh to take urgent measures to develop human resources in the energy sector.