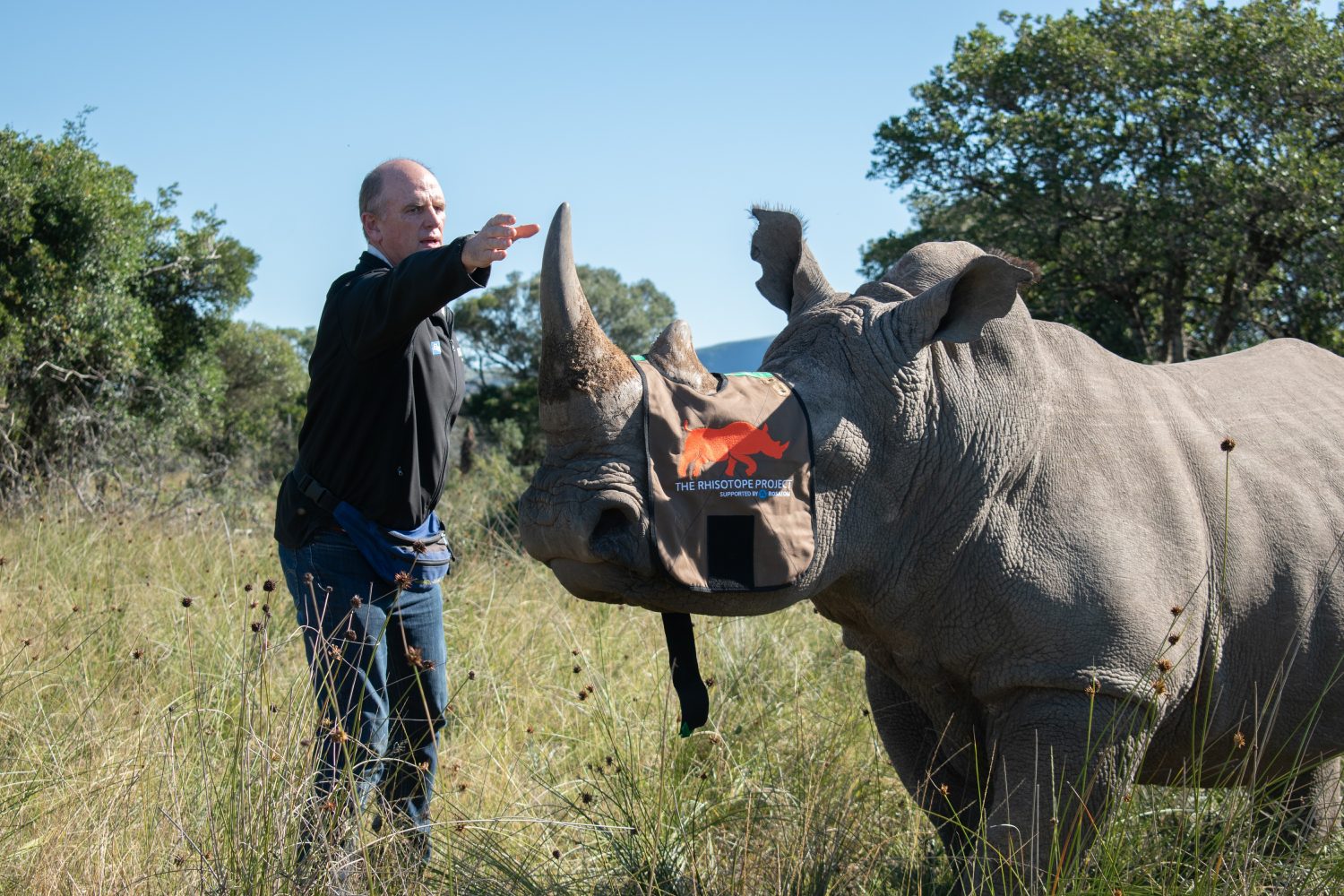 How Isotopes Can Save Rhinos

South Africa is home to 90 % of the global rhino population. “These are amazing animals — ​real dinosaurs survived to our time. They seem to us to be like armored tanks impossible to hurt, but inside that hard shell they are very timid and clever creatures to whom it is easy to become attached. It is stunning how they look after the young. A mother and a calf do not leave each other, always communicating — ​the bond between them is very special. They are also very enduring animals. Rhinos can run really fast for a long time, but their physical parameters when measured after the run remain absolutely normal,” says William Fowlds, a chief veterinarian of the Rhisotope Project, who has been working with rhinos for more than 20 years.

Unfortunately, rhinoceros are of interest not only to wildlife enthusiasts, but to poachers as well. These animals are poached for their horns despite the fact that trading rhino horn is banned internationally. Its price exceeds USD26,000 per kilogram. Rhino horn is widely used in traditional medicine in many Asian countries. It is also used to make expensive gifts, statuettes and other decorations. In 2010–2019, more than 9,600 rhinos were killed by poachers in Africa.

“The last 10 years of my work have been almost entirely dedicated to the fight against poaching. We are spending a lot of money and putting much effort, but it is still not enough. We have got to think out of the box to win. This is what the Rhisotope Project is about for me. I think it is a radical approach that will bring a totally different level of protection,” William Fowlds says.

Rosatom to the Rescue

The idea of the Rhisotope Project belongs to Professor James Larkin, Director of the Radiation and Health Physics Unit at WITS University (South Africa). He says that the idea was in the air and he was just a person “in the right place, at the right time and with the right background.” James proposed putting a radioactive isotope inside the rhino horn in the amount that is safe for the animal. First, it is impossible to smuggle such a horn out of the country because it is easily detectаble at any border crossing. Second, it will be hard to sell labeled horns as no one wants to buy a radioactive product.

James Larkin has known Ryan Collyer, CEO of Rosatom Central and South Africa, for a long time as the nuclear world is rather small in South Africa. In late 2020, he shared his idea with Ryan. “I thought Ryan was a person whom I could trust. I was blown away by Rosatom’s intention to support my project and the speed of response from them. Honestly speaking, there was a moment I wanted to pinch myself to be sure I was not sleeping,” James says.

“It is a truly international effort with Russians, Australians, Brits and South Africans working to create solutions to save these iconic animals,” James Larkin says enthusiastically.

On the eve of the project launch, all the parties gathered in the Buffalo Kloof Private Game Reserve. The project organizers told the audience about two central figures of the project, rhinos Igor and Denver. Igor was named in the honor of Igor Kurchatov, a prominent Soviet scientist and a ‘father’ of the Soviet nuclear industry. Denver bears the name of Colorado’s capital, a home city to one of the project partners.

William Fowlds explained what would be done during the first phase of the project. A trace amount of C13 and N15 non-radioactive stable isotopes will be injected into the two rhinos’ horns. This step is needed to monitor the behavior of isotopes inside the animals. Researchers expect that the substances will stay inside the horn. Samples of blood, urine and stool were taken from the two rhinos for three weeks before the start of the project and will be taken for three months after the injection of isotopes.

On May 13, the first stage began. The veterinarian team knocked down the rhinos and, to reduce the level of stress, covered their eyes with masks and inserted ear plugs. Then the scientists drilled a small hole in the horn of each animal — ​it was no more painful for rhinos than cutting nails for people. The isotope was then placed inside the hole and sealed in there. The entire procedure took about half an hour.

Project to be continued 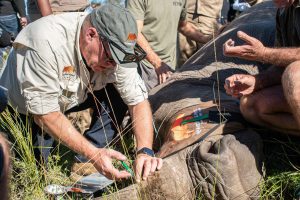 Monitoring results are planned to be announced on September 22, the World Rhino Day. The scientific commission consisting of the project participants should confirm that isotopes do not travel from the horn tissue into other parts of the body and do not harm the animal. Then the researchers will select a suitable radioactive isotope and estimate its required amount using a supercomputer and a 3D printer. This will be the second stage of the project. At the third stage, the selected radioisotope will be injected into rhino horns.

“We would like to have as many rhinos labeled as possible, probably 5,000 to 7,000 animals in the next few years,” James Larkin says.

Rosatom plans to be a supplier of radioisotopes. The Russian nuclear corporation will also share its unparalleled expertise in selecting the isotope and simulating radioactive decay processes. “By participating in this project, Rosatom demonstrates yet again its competencies and ability to solve problems in very different areas,” says Russian Ambassador to South Africa Ilya Rogachev.

“Rosatom is a large organization with huge amounts of expertise in the nuclear industry, 75 years of experience and, I think, some of the greatest minds in the world. So this is definitely a major role that we can play from a research and development perspective in this project,” Ryan Collyer says.

If everything goes to plan, the same procedure will be used in respect to other animals, not only rhinos, Ryan Collyer added. “This project might make a start towards a large wildlife conservation movement. As the project evolves, I believe, we will see where else this technology can be used. Isotopes might be injected, for example, in tusks or horns of other endangered animals.”

Saving rhinos from poaching is the primary, but not only goal of Rhisotope. This project also expands the limits of radiation technology application. “I think one of the major issues in the nuclear industry is a massive misconception around it. This project shows that the nuclear industry is an industry that helps people and plays a fundamental role in protecting the environment,” Ryan Collyer says.

— The year 2021 is declared the Year of Science and Technology in Russia. Much attention is paid to research and development projects, initiatives and innovative programs. What can be more international and uniting than science? Scientific collaboration should reach across borders, time zones and continents if we want to preserve our common home and solve environmental problems. We hope that the Rhisotope Project will become another successful joint initiative of Russia and South Africa.

The country passed its Atomic Energy Act back in 1948. The first uranium production plants were commissioned as soon as 1949. By the late 1950s, South Africa was producing 5,900 tons of uranium to become a leading supplier of this metal (15 % to 17 % of the market).

In 1965, Safari‑1 research reactor built by the American company Allis-­Chalmers achieved its first criticality. It is still in operation although the government plans to replace it with a more powerful multi-­purpose research reactor. Two commercial power reactors of the country’s only Koeberg Nuclear Power Station were brought online in 1984 and 1985. Having a total installed capacity of 1,860 MW, they generate 6.7 % of electricity in South Africa.

In the 1990–2000s, the country was a pioneer in developing high-temperature gas-cooled reactor technology. In July 1991, South Africa joined the Non-­Proliferation Treaty and, in September of the same year, signed safeguards agreements with the IAEA.