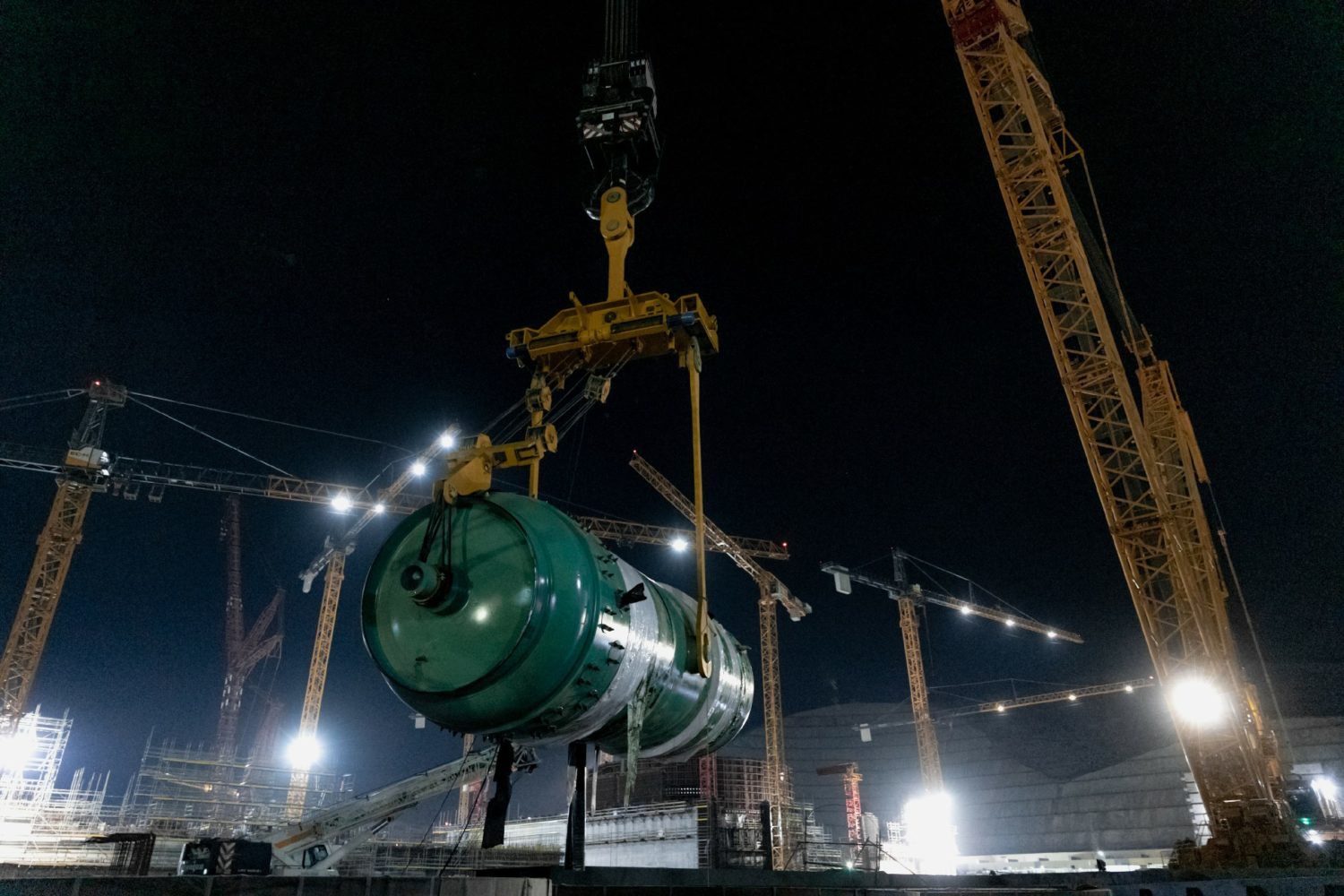 Akkuyu is growing in leaps and bounds as Unit 1 reactor building has reached 51.5 meters high. Rosatom remains a major contributor to social initiatives in its host communities, financing charity programs and organizing events for local employees and residents.

Construction works are running in parallel and at a robust pace at all four reactors of the Akkuyu nuclear power plant. Each month faces a new milestone. The first reactor unit boasts the highest completion percentage. In late October, a pressurizer was installed in the reactor building of Unit 1. It is a key component of the reactor’s primary circuit designed to create and maintain pressure inside the primary coolant circuit in different operating modes.

“The pressurizer was installed with the open top technology, that is, through the opening in the upper section of the reactor building. After the sixth tier of the internal containment shell was assembled, we have only installation of the dome left. This will actually put an end to construction works, and we will proceed with installation and pre-commissioning of the equipment,” says Sergey Butskikh, First Deputy CEO at Akkuyu Nuclear and Director of the under-­construction Akkuyu NPP.

Earlier, assembly of the sixth tier of the internal containment shell was completed in the reactor building of the first unit. It is a 224‑ton 44‑meter round steel structure consisting of 30 sections. After it was installed onto the reactor building, its height reached 51.5 meters.

Meanwhile at Unit 2, workers installed Tier 2 of the internal containment shell. It was pre-assembled on the ground to save construction time. The second tier weighs 330 tons and consists of 24 sections. The installation process took about seven hours.

The plan for the rest of the year is to install a containment dome onto Unit 1, begin pre-operational flushing and non-pressure tests on the reactor vessel, and commission the polar crane. After that, pre-commissioning works will begin. Before a new reactor goes critical, its core is loaded with dummy fuel assemblies to test the operation of key reactor systems. The dummies and testing equipment for the reactor core, including dummy control rods and nuclear fuel acceptance tools, have been produced at the Novosibirsk Chemical Concentrates Plant (NCCP, part of Rosatom) and already shipped to Turkey. Shipment of nuclear fuel for the initial loading of Unit 1 is scheduled for 2023.

Safety is Rosatom’s top priority across every aspect of its activities. In late October, employees of Turkey’s Disaster and Emergency Management Authority (AFAD), fire departments and the General Directorate of Forestry visited the last in a series of training workshops held on the Akkuyu site. Representatives of the emergency services spent a month studying the organization and operation of a nuclear plant fire safety service and fire prevention systems. They also learned about national regulations on fire safety at nuclear facilities and got to know the technical specifics of control and monitoring equipment. Over 100 professionals attended the workshops.

Akkuyu is Rosatom’s most grand-­scale project and one of the largest facilities under construction in Turkey. This project is in the focus of attention of the international community. In October, Istanbul hosted the 15th Energy is Future World Energy Congress and Expo (EIF 2022). Akkuyu Nuclear acted as a general partner of this international event that brought together key players of the Turkish energy sector and energy industry representatives from 52 countries.

Rosatom took part in the business program of the congress. One of the panel sessions was dedicated to nuclear construction supply chain management. The session started with a virtual tour to Novovoronezh II, a reference nuclear power plant for the Akkuyu NPP.

EIF 2022 Expo visitors had an opportunity to visit Akkuyu Nuclear’s booth. They were demonstrated an augmented reality mobile app, VVER‑1200 NPP Technology, that featured an interactive model of the Akkuyu NPP and visualized its key facilities and equipment. The visitors could also learn more about the operating principles of a nuclear power plant. Akkuyu Nuclear procurement managers held more than 50 business meetings with potential suppliers of the Akkuyu project.

Rosatom contributes a lot to social initiatives in the Akkuyu NPP host region. In early November, Akkuyu Nuclear supported a number of socially important projects. Gülnar and Silifke municipalities received certificates for about TRY 10 million to be spent on charitable grants. Gülnar authorities plan to spend the money on the construction of a nursing home for the elderly. Besides, they have in mind establishing a municipal park with exercise machines, a playground, and family recreation areas. In Silifke where most of the Akkuyu site employees live, the money will be spent to build a sports ground and support a local sports club.

“Any large-­scale construction stimulates migration of employees into the region. This increases pressure on the social infrastructure, and we work in close contact with the municipal authorities to find out areas in which our support will be the most effective,” CEO of Akkuyu Nuclear Anastasia Zoteeva stressed the point.

In late October, the Akkuyu site hosted special events dedicated to the Republic Day. After the work shift was over, the site workers unfurled a giant flag of Turkey and formed up the figure of 29 on the Eastern cargo terminal. To celebrate the Republic Day, Akkuyu Nuclear also organized a tour to the construction site for the children of its employees. They could see the Eastern cargo terminal, had a chance to get into the cabin of world’s most powerful crawler crane Liebherr LR 13000, visited a fire station of the Akkuyu NPP, and climbed to the site’s highest viewpoint at the height of 200 meters.

Not long ago, Akkuyu Nuclear named the winners of the nationwide children’s painting contest. It was held online and brought together around 200 contestants from all over Turkey. The winners and nominees in each of five nominations received gifts, a tablet computer as the first prize, a drawing tablet as the second prize, and a professional drawing kit as the third prize.

Akkuyu Nuclear organizes its children’s painting contest on an annual basis. Last year, more than 150 applications were filed by children living in different parts of the country, including Istanbul, Ankara, Izmir, Antalya, Mersin, Bursa and many other provinces.