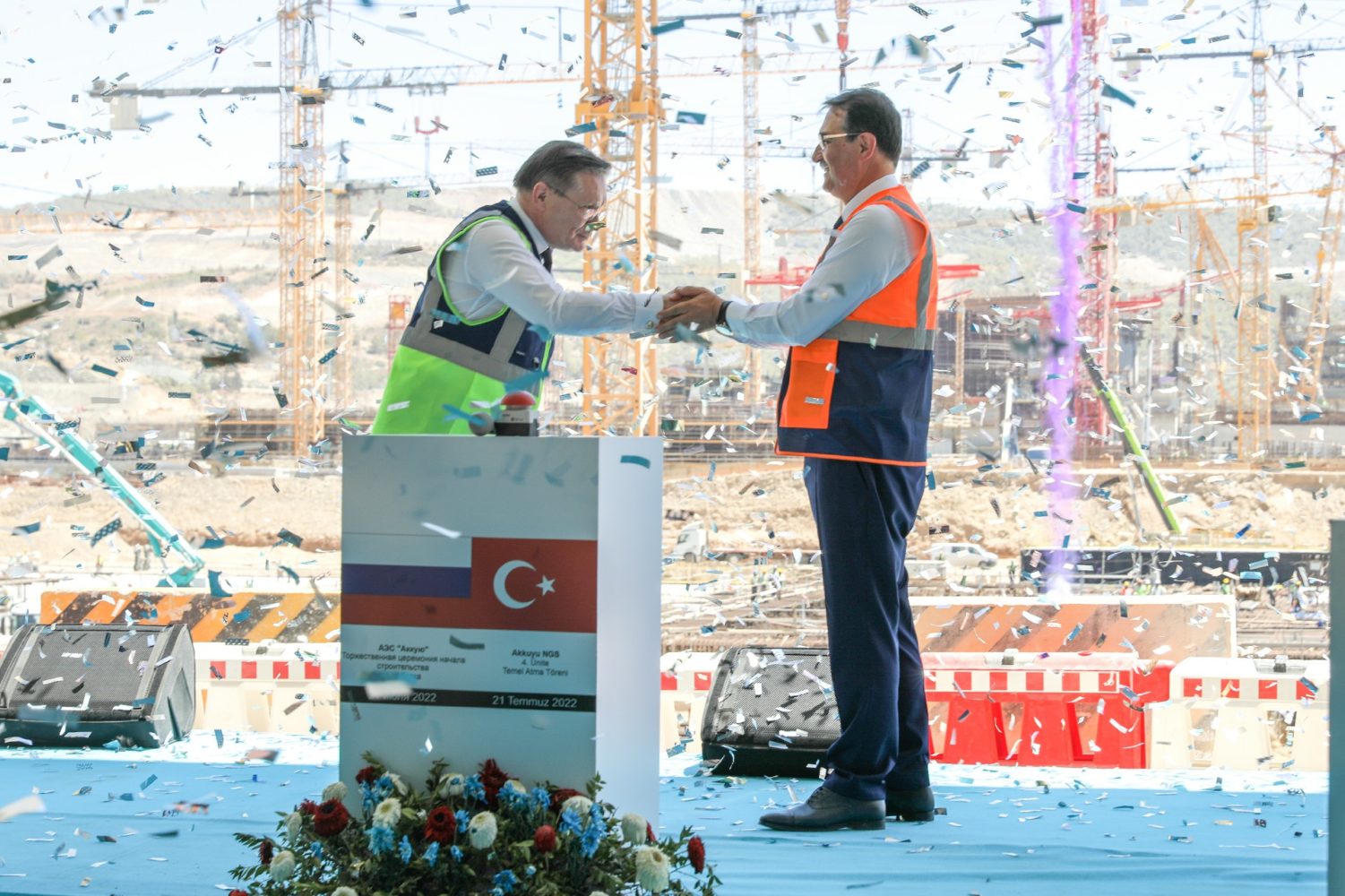 Last But Not Least

First concrete was poured for the fourth unit of Turkey’s Akkuyu NPP in the second half of July. Unit 1 is 80 % ready; constructions works are planned to be finished as soon as next year.

On 21 July a ceremony dedicated to the start of the construction of the fourth unit at the Akkuyu NPP, signifying the beginning of the main construction phase.

“I am confident this project has become an example worth following in the fruitful cooperation between the companies of our countries, involvement of the Turkish industry, and the establishment of an efficient supply chain. Choosing modern and reliable Russian nuclear technologies, the Republic of Turkey has created a foundation for energy sovereignty for decades ahead,” Rosatom Director General Alexey Likhachev said at the ceremony.

“Akkuyu Nuclear Power Plant is the largest one-time investment in the history of our Republic. When completed, the four reactors will meet 10 percent of our electricity demand.  Akkuyu will play an important role not just through the electricity generation, but also with its contribution to our green energy goal,” noted Fatih Dönmez, Minister of Energy and Natural Resources of Turkey.

Construction works are going on at the other three units of the plant. A core catcher was installed in the reactor pit of Unit 3. It is an essential element of the passive safety system and a know-how of the Russian nuclear corporation. In case of a core meltdown, the core catcher retains corium fragments and keeps them inside the reactor containment.

The third tier of the internal containment shell was installed in the reactor building of Unit 2. The shell also belongs to core safety systems of a nuclear power plant. It protects the reactor and supports pipeline penetrations and a polar crane, which is used for reactor maintenance during the plant operation.

The first polar crane for Unit 1 has been already delivered to the construction site. Having a lifting capacity of about 400 tons, it is one of the most important mechanisms of the nuclear island. The crane will be used throughout the lifecycle of the nuclear power plant. It will be installed under the containment dome and rotate 360° on a circular rail track to perform handling and other functions.

“Arrival of the polar crane for Akkuyu Unit 1 is one of this year’s key logistics operations. Before being commissioned, it will have to pass many different reliability and movement accuracy tests,” Sergey Butskikh, First Deputy CEO at AKKUYU NUCLEAR and director of the under-­construction nuclear power plant commented on the event.

All construction stages at Akkuyu are supervised by independent inspectors and Turkey’s Nuclear Regulatory Authority (NDK). In June, the site was visited by representatives of EUAS International ICC, an international division of EÜAŞ, Turkish state-­owned electricity generation corporation. They inspected all the four construction sites, a warehouse for large-­sized nuclear equipment, and the Eastern sea cargo terminal. The delegation paid much interest to construction management practices, coordination between numerous contractors engaged in the project, and nuclear safety culture.

The Akkuyu project was in the focus of attention at the 8th Nuclear Power Plants Summit (NPPES 2022) held in June. It is the largest business forum for nuclear technology and industry in the Middle East and North Africa with about 2,000 delegates and guests taking part in it this year.

“Nuclear technology has made notable progress since the foundation laying ceremony at Akkuyu Unit 1 in 2018. Over this period, first concrete was poured for 24 power reactors in different countries, and a half of them is built by Rosatom companies. Nuclear has been finally recognized as a reliable and sustainable source of energy. The Akkuyu project will have a strong positive effect on the Turkish economy,” Anton Dedusenko, Chairman of the Board at AKKUYU NUCLEAR, said at the summit opening.

Rosatom and AKKUYU NUCLEAR in partnership with Russian-­Turkish company Titan 2 IC Içtaş Inşaat, the main contractor for the Akkuyu NPP construction project, organized a regular seminar for potential suppliers and subcontractors on the sidelines of the summit. The Russian nuclear corporation pays close attention to the relations with companies willing to join nuclear projects. Speakers of the seminar shared information about Rosatom’s corporate procurement system, local procurement programs in Turkey, and real business cases involving Turkish companies. The Akkuyu project is attracting increasingly more suppliers, and they had an opportunity to ask their questions about tendering procedures for the construction of Turkey’s first nuclear power plant. Over 200 delegates attended the two-day seminar. Representatives of about 150 companies held B2B meetings with AKKUYU NUCLEAR employees.

Rosatom also took part in the NPPES 2022 expo. This year, its exhibition stand featured pictures drawn by children of Akkuyu employees after a visit to the construction site. The pictures stressed the role of Akkuyu NPP as a generator of clean energy for Turkey’s future. The stand provided information about Rosatom’s activities and international projects. Visitors could learn about technological solutions employed in the Akkuyu design, including Generation III+ VVER‑1200 reactors and safety systems, and a current status of the project. 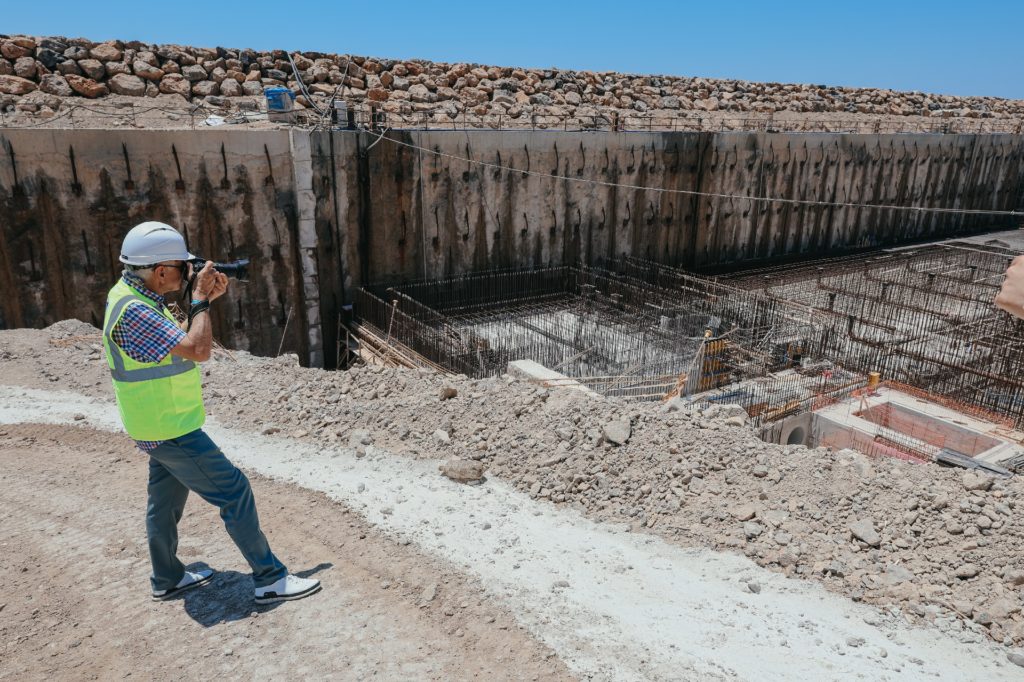 Of particular note was a virtual tour to the Novovoronezh NPP organized by Rosatom on the sidelines of the summit. Novovoronezh Units 6 and 7 featuring VVER‑1200 reactors serve as reference power units for the Akkuyu NPP. The 360° virtual tour gave Turkish audience a unique chance to see different facilities of a nuclear power plant, such as the main control room, turbine island, and even the nuclear island, access to which is usually restricted. The people who took part in the tour were told about the operating principles of the Novovoronezh NPP, its contribution to the regional economy, social and infrastructural development. “The virtual tour gave me the chance to see a real nuclear facility. I am glad our country will have its own nuclear power plant, a source of clean energy, and is making progress in this field. During the virtual tour, we were shown how many safety systems a nuclear plant really has. I think the site will offer jobs to young people like us. I am interested in nuclear energy and, of course, would like to study in Russia,” says Mert Sancak, a third-year student of engineering physics at the Istanbul Technical University.

The Akkuyu NPP will meet 10 % of total power demand in Turkey. The country’s energy security is what makes the project especially important, Denis Sezyomin, Director for Construction and Production Organization at AKKUYU NUCLEAR, said in an interview to CNN Turk. Akkuyu is no less important in terms of environmental sustainability as the plant will prevent 17 million tons of hazardous emissions annually.

According to Denis Sezyomin, the first unit of Akkuyu is 80 % ready. “We know how 2023 is important for the Republic of Turkey. We will do our utmost to complete the unit by that date, using all the available resources of our team,” Sezyomin explained.

Akkuyu will have a positive effect for the national economy. “Akkuyu’s contribution to Turkey’s GDP will amount to USD 50 billion,” Denis Sezyomin pointed out. Local content in the project is expected to reach 40 %.

“About 20,000 people are employed at the construction site at the moment, and 80 % of them are Turkish nationals. When the nuclear power plant is commissioned, there will be around 4,000 people employed, including 600 young Turkish engineers who have received their degrees from Russian universities. A total of 260 of them have finished their education and already work at the construction site,” Sezyomin said. He explained that one job at the nuclear power plant created another 10 jobs in related industries.

In June, Turkish Social Security Institution (SGK) named the Akkuyu NPP the largest employer in the Mersin Province and sent a letter of appreciation to the management of AKKUYU NUCLEAR. “The Akkuyu project has been a regional leader and a Top‑1 employer in the Mersin Province since its launch. Over 600 local residents have been employed for the construction by now,” AKKUYU NUCLEAR CEO Anastasia Zoteeva commented.