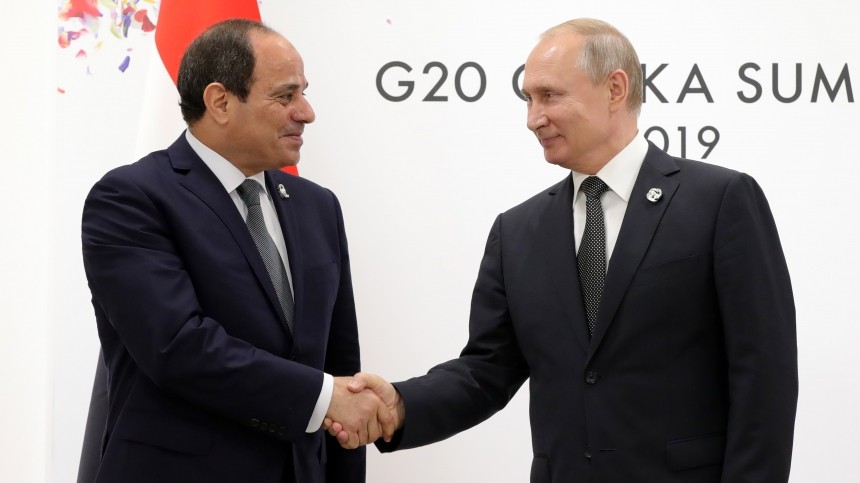 A comprehensive strategic partnership agreement between Russian and Egypt was ratified by Russian President Vladimir Putin. The document provides for extensive cooperation in the trade, economic, defense and engineering projects. The agreement focuses on the both countries’ plans to carry out energy infrastructure projects, particularly those in the nuclear energy industry.
At an earlier meeting with Egyptian President Abdel Fattah al-Sisi on the sidelines of the G20 summit, Putin stressed the dynamic development of Russian-Egyptian relations, “Our relations are developing quite fast, and we strive to bring our bilateral ties to a new, more advanced level. This is the goal of the Comprehensive Strategic Partnership Agreement.”
The Russian president also mentioned the work of his Egyptian counterpaer as a co-chair of the Russia-Africa summit to be held this October in Russia. “I hope that together we will give a new impetus to the development of relations between Russia and African countries,” Putin said.
For his part, Sisi praised the major joint projects implemented in Egypt, including the El Dabaa Nuclear Power Plant, and the Russian Industrial Zone in the Suez Canal Economic Zone, which is expected to take bilateral economic relationship to an unprecedented level.
The Moscow policy focuses on building long-term mutual relationships with the African continent in general and Egypt in particular. Cairo welcomes this policy, Ali Abdel Aal, Speaker of the House of Representatives, said delivering a welcome speech at the opening of the Russia-Africa parliamentary conference. He stressed that vast resources and economic potential of the continent could be used for mutual benefit of Russia and African countries.
“I think it is not only Egypt but other African countries as well that see Russia as a partner to their economic development projects, particularly projects involving the use of nuclear for civil purposes. It is very important that Russia has extensive experience in this area and offers different products that can be adapted to the needs, conditions, financial and political situation in a particular country,” Ali Abdel Aal said.

Egypt is working hard to establish a national nuclear program. For example, a national workshop on the cross-border legal instruments for the safe, secure and peaceful use of nuclear energy was held in Cairo on July 8–11 to raise awareness of government officials on the importance of adherence to and effective implementation of the instruments in the areas of safety, security, safeguards and civil liability for nuclear damage. The workshop was organized as part of the IAEA’s ongoing cooperation with Egypt, for representatives of the Nuclear Power Plants Authority (NPPA), Egyptian Nuclear and Radiological Regulatory Authority (ENRRA) and other stakeholders from relevant ministries and institutions.
NPPA’s Technical Advisor Khalil Yasso welcomed the event organized by the IAEA in collaboration with the NPPA, “This seminar is important in raising our understanding of these and other instruments as we continue working towards introducing nuclear power.”
An IAEA Integrated Nuclear Infrastructure Review (INIR) mission is scheduled for October this year upon request of the Egyptian Government.
The importance of the El Dabaa project for Egypt’s industry and economy is emphasized by experts. Ali Abdel Nabi, former Deputy Director of the Egyptian Nuclear Power Plants Authority, named El Dabaa the largest project in the national history. In an interview to the weekly Akhbar El Yom, he said that construction of a nuclear power plant played an important role in the country’s sustainable development, “For our products to find a way to the international market, they should be of high quality and sold at a competitive price. Construction of a nuclear power plant generates demand for high tech products and stimulates the national industry to become globally competitive. What’s more, the sustainable development of industry and economy needs a safe and reliable source of clean and cheap power, the power produced by nuclear reactors.”
The expert stressed that he considered Egypt’s approach – buying technology from Russia – to be optimal, “Since Egypt embarked on a civil nuclear program in 1955, the Russian nuclear power technology has evolved. We will have Generation III+ VVER-1200 reactors that will be supplied by Rosatom for the El Dabaa Nuclear Power Plant.
This new reactor technology boasts better economics and improved safety systems protecting the reactor against human error and external threats. VVER-1200 reactors feature an array of redundant safety systems minimizing the possibility of accidents.”