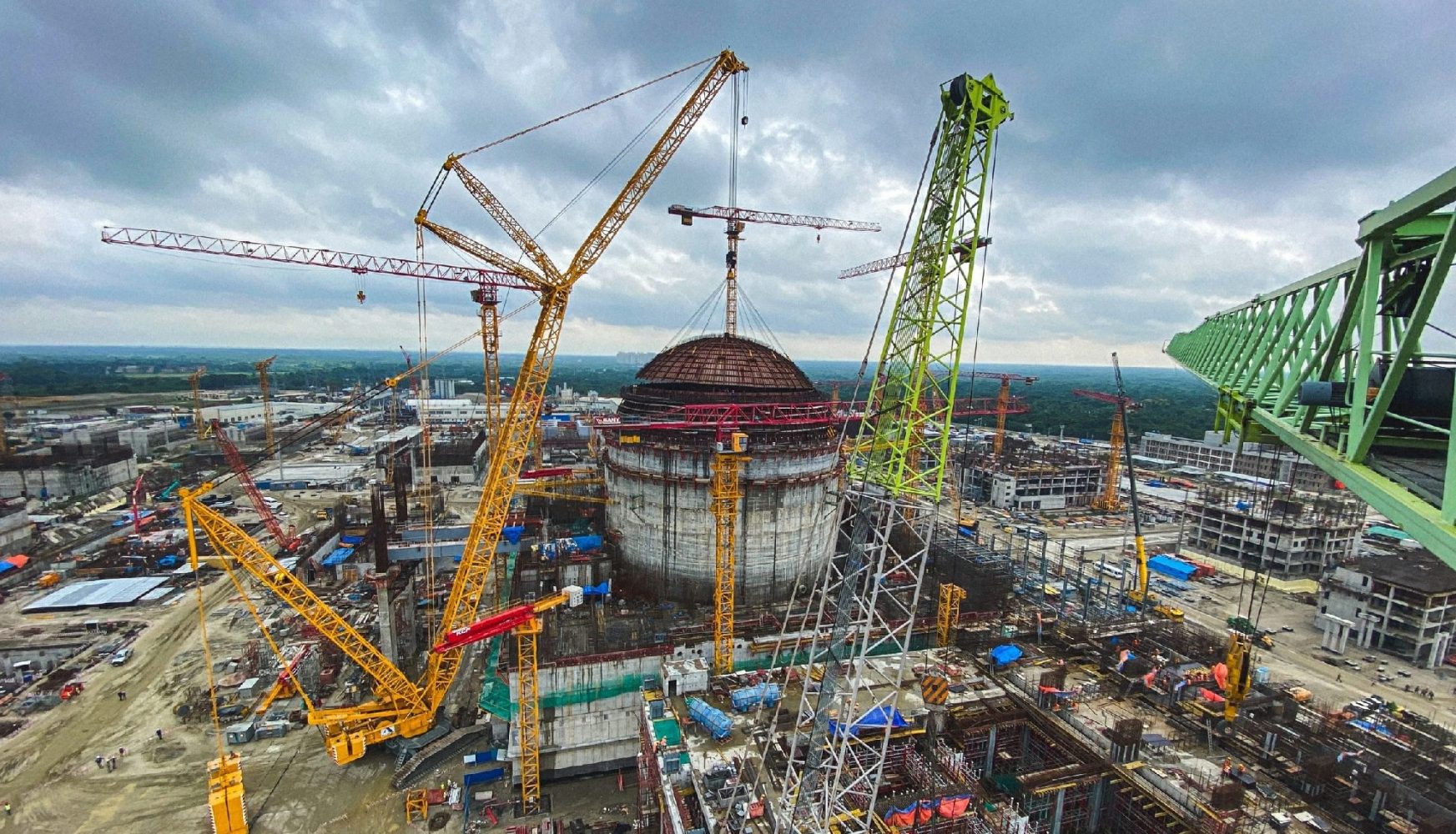 Construction of the Rooppur NPP is going at full steam. The plant has passed one of this year’s key milestones as steel structures were installed for the internal containment dome. Skilled personnel for the nuclear plant is trained even as these lines are written: students from Bangladesh study in leading Russian universities.

The dome was installed in two stages. Its lower section weighing 185 tons and having 44 meter in diameter had been put in place a week before.

“The Rooppur NPP has passed another important milestone of the construction process. At the next step, we will put a polar crane in operation, install a reactor pressure vessel, a steam generator and primary coolant piping,” said Alexei Deriy, ASE Vice President and Director of the Rooppur construction project.

Russian companies are manufacturing equipment for the nuclear plant.

In early August, a VVER‑1200 reactor pressure vessel and four steam generators for the second unit were delivered from Russia to Bangladesh. Those pieces of equipment were manufactured at Atommash, a subsidiary of AEM Technologies. The delivery took more than two months. The equipment was first transported from Atommash site to the cargo port on the bank of Tsimlyansk Reservoir (Don River) in Volgodonsk, loaded onto barges and then shipped by water to Novorossiysk (all in Southern Russia). The sea route from Novorossiysk through the Black Sea and the Suez Canal to the Port of Mongla in Bangladesh covered 14,000 kilometers.

In July, Izhevsk electromechanical plant Kupol shipped to its customer, AtomStroyExport, three recirculation units (RU) for the Rooppur NPP. They are designed to maintain a pre-set air temperature inside the containment building enclosing the reactor and cool down the air supplied to the systems controlling the reactor operation. Each unit consists of a fan, air cooler, confusor and connector between them.

The recirculation units were shipped from Izhevsk to the sea port in Saint Petersburg (Russia). Then they will take a long journey by sea to the Port of Chittagong in Bangladesh. The recirculation units are packed in waterproof boxes designed by the plant’s engineering service specially for this type of products.

Kupol will also manufacture and ship seven more RUs for the first stage of the Rooppur NPP construction project by the end of the summer. All in all, a total of 20 recirculation units will be supplied under the contract with AtomStroyExport in 2021–2022.

Skilled personnel for the nuclear power plant is trained in Russia. Since 2014, students and researchers from Bangladesh have been offered grants to study in Russia and awarded internships in Russian nuclear technology companies and affiliated organizations. Many of them have an opportunity to study at the National Nuclear Research University (MEPhI), a leading Russian educational institution specializing, among others, in nuclear physics.

In early July, fifteen Bangladeshi graduates from MEPhI received their diplomas. After the official graduation ceremony, Ambassador Kamrul Ahsan wished the young professionals success and noted the high importance of the Rooppur NPP project for the development of Bangladesh. According to Dr. Satyajit Gush, Department Director at the Atomic Energy Regulatory Authority of Bangladesh, Rusatom Service plays a significant role in ensuring an adequate level of nuclear infrastructure in the country, including through human resource development. Yulia Chernyakhovskaya, a representative of Rusatom Service, briefly spoke about the opportunities for graduates, having mentioned a large number of stakeholders and their staffing needs, “Nuclear industry organizations and agencies have been created and are actively developing in Bangladesh. We have here key participants of the Bangladesh nuclear program, and they will support you in your professional growth.”

The plant itself will be safe and secure. Since 2020, the Bangladesh Army has been responsible for developing a physical protection system for the first nuclear power plant in the country, engaging as a contractor the Russian company SNPO Eleron (part of Rosatom and one of Russia’s largest companies specializing in security systems).

In early July, experts from the Global Nuclear Safety and Security Institute (GNSSI) of Rosatom Technical Academy conducted a two-week training course on physical protection of nuclear facilities for representatives of the army. During the course, the officers led by Brigadier General of the Bangladesh Army Abdullah Al Yusuf were educated on the development and implementation of physical protection systems at nuclear facilities and informed of key international regulations in this area.

In addition to lectures, the trainees practiced a lot to use physical protection systems and devices at a dedicated training ground and in test laboratories of Rosatom Technical Academy. As an ultimate objective of this training, the experts from the Bangladesh Army received comprehensive knowledge and experience that helped them better understand the specifics of each phase of building a physical protection system for nuclear power plants.

“Our entire team is very serious and strives to learn as much as possible in order to use the knowledge in our further activities in physical protection,” said Brigadier General of Bangladesh Army Abdullah Al Yusuf.

Rusatom Service is a Rosatom company offering comprehensive solutions for lifelong maintenance of nuclear facilities, as well as a wide choice of individual products and services.

Rosatom Technical Academy specializes in advanced professional training and reskilling courses for the nuclear industry personnel and provides staff certification services. The academy also operates an anti-terrorism center for the protection of nuclear facilities and is an international focal point for the development of security guidelines for nuclear facilities and training of nuclear staff from abroad.