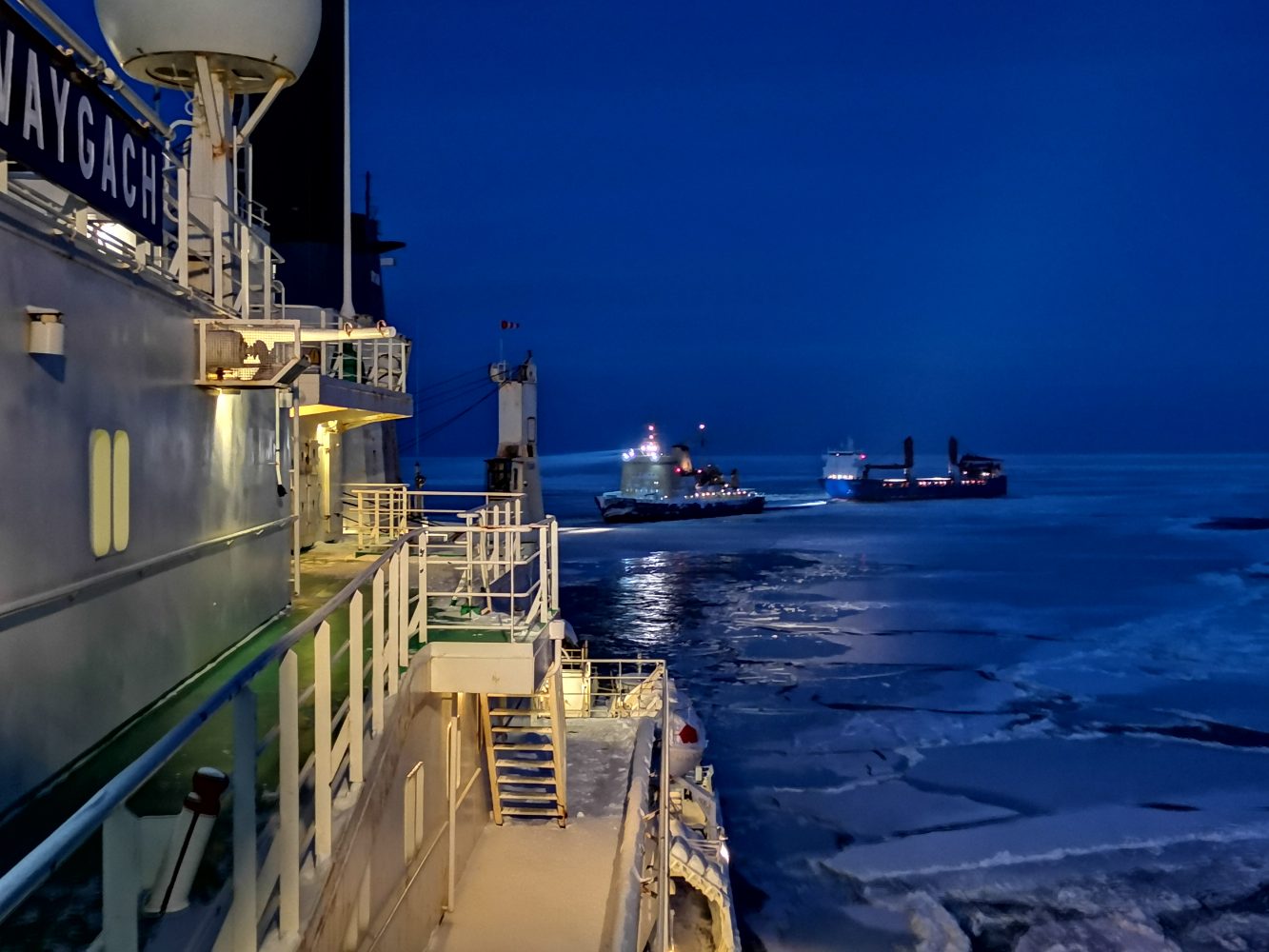 Assistance on the Northern Sea Route

Ice in the Arctic Ocean is relatively thin this winter, so oil tankers and LNG carriers often travel the Northern Sea Route (NSR) without being escorted by an icebreaker. They are assisted by the Marine Operation Center (MOC) of the Russian nuclear fleet operator Atomflot (part of Rosatom). Using an automatic system processing real-time data on the weather, currents, ice motion and other information, the MOC builds an optimal route for each ship. Captains receive information about hazards on the travel route and navigation recommendations.

Commissioned in August 2020, the system is part of the Northern Sea Route infrastructure that makes the navigation in the Arctic as safe and predictable as possible. During the summer navigation season, 11 convoys were escorted using the information system.

It is not always possible for the ships to travel the NSR without an icebreaker escort. In late December and early January, Rosatom icebreakers rescued a cargo ship Sparta III trapped in the ice.

Sparta III and an ice-class tug Kigoriak were traveling from Dudinka to Arkhangelsk and got stuck in the Yenisei Gulf because of massive ice ridges. They could not get out of the ice trap; fuel and water were running short, and instruments froze.

The two ice-bound vessels were rescued by the icebreaker Vaygach working in the Gulf of Ob. It broke ice around the cargo ship and took it in tow. The short scope towing was the only option possible in those conditions, although the standard option is close towing. It could not be used for Sparta III, which has a specific design of the bow, and close towing would have damaged the propelling and steering mechanisms of the icebreaker. Long scope towing was not possible either since ice masses would have put too much load on the towline. 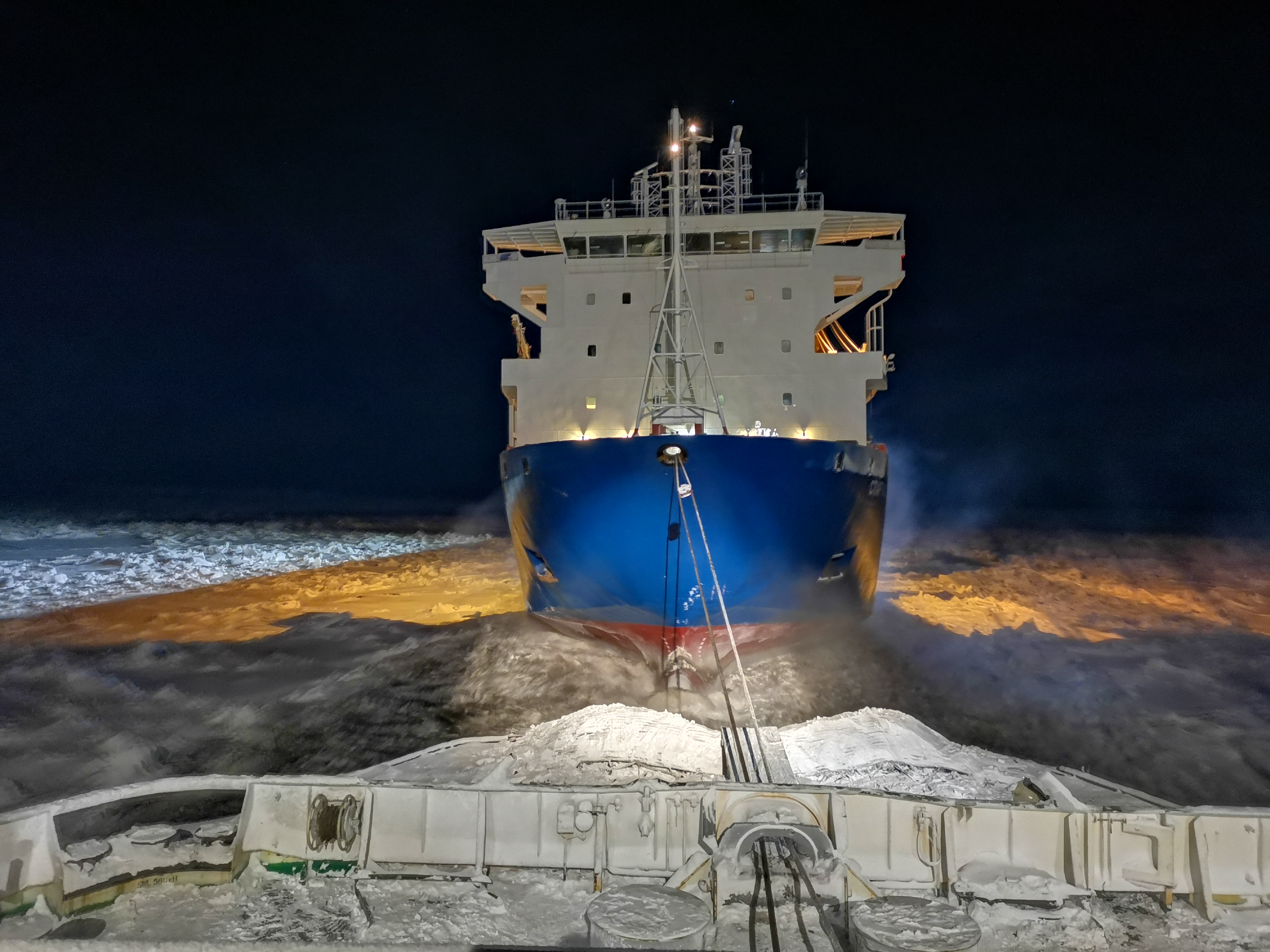 After Sparta III and Kigoriak were escorted by Vaygach through the ridged ice, they set for the mouth of the gulf. Kigoriak managed to make it out of the gulf, while Sparta III got stuck again in a day, with her steering mechanism broken. The crew spent the New Year waiting for help. On January 1, Sparta III was approached by Vaygach and the diesel icebreaker Admiral Makarov. Vaygach made a channel in the ice, while Admiral Makarov took the cargo ship in tow. On January 2, all the three ships passed by to the west of Bely Island in the Kara Sea, where the ice was thinner. Vaygach then returned to her work, while Admiral Makarov escorted Sparta III into the Barents Sea. On January 12, the rescue vessel Spasatel Karev towed the cargo ship to Murmansk for repairs.

Zvezda Shipyard (Russia’s Far East) continues to build the first Project 10510 Lider-class nuclear icebreaker. Having a capacity of 120 MW, the icebreaker will be capable of traveling through 4-meter-thick ice and making a 50-meter-wide channel in the ice. Its design was developed at Aisberg Design Bureau. The Lider-class vessel will be equipped with a RITM‑400 nuclear propulsion system developed at OKBM Afrikantov (part of Rosatom). The lead vessel’s name is Rossiya (Russia).

A new fuel modification is developed for the Lider icebreakers. In January 2021, the Russian Research Institute of Inorganic Materials (part of Rosatom) finished designs of the startup neutron source, fuel elements and burnable absorbers for RITM‑400. Another Rosatom Group company — ​Chepetsk Mechanical Plant — ​is preparing to begin the production of a zirconium alloy caisson pipe. The pipe will house reactivity compensation rods of the reactor control and protection system.

“Lider will need 1.4 times more fuel than Arktika because its reactors will have more fuel rods. Unlike RITM‑200 reactors that have hexagonal fuel assemblies with spacer grids and cylindrical fuel rods, RITM‑400 units will have a channel-type core with cylinder-shaped fuel assemblies and self-spacing complex-profile fuel elements,” says Gennady Kulakov, Director for Fuel Research and Development at the Russian Research Institute of Inorganic Materials. In addition, the refueling interval will increase from 5–6 years (as existing icebreakers have) to 10 years.