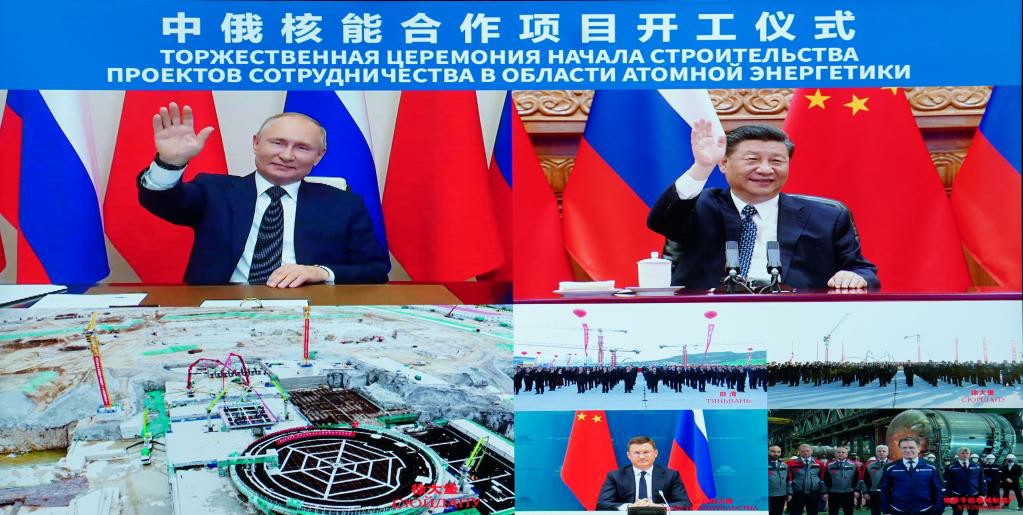 Today, we have a good reason to tell our readers about China as mid-­May saw the launch of construction at two nuclear plants, Tianwan and Xudabao. Large-scale power projects are not, however, the only focus of interest for Russia and China, two major players of the global nuclear market.

President of Russia Vladimir Putin and President of China Xi Jinping gave the go-ahead to the construction at Tianwan and Xudabao via a video link. The new units are yet another milestone in the cooperation between the two countries.

General contracts for the construction of four power units, two at Tianwan and two at Xudabao, were signed in 2019. According to the contracts, Rosatom will design nuclear islands and supply key equipment and fuel for the Tianwan units. At Xudabao, the Russian nuclear corporation will deliver the same scope of work and also provide design supervision, installation and commissioning services. Commissioning of the four units is scheduled for 2027–2028. 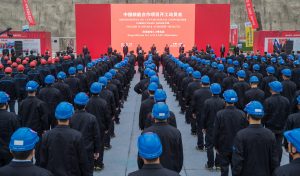 The new units are the third stage of cooperation between Russia and China in commercial nuclear power generation. The initial stage included construction of the first two units at Tianwan (commissioned in 2006 and 2007). At the second stage, which started in 2010, Rosatom and China National Nuclear Corporation (CNNC) signed a general construction contract for Units 3 and 4. They were commissioned in 2017 and 2018. “The Tianwan nuclear power plant operates reliably for the good of the Chinese people and makes a substantial contribution to China’s energy security. The power units built with input from Russia have generated more than 270 billion kilowatt-­hours of electricity,” said Rosatom Director General Alexey Likhachev.

He took part in the kickoff ceremony while visiting Atommash, part of Rosatom’s power engineering division AtomEnergoMash (AEM) and a manufacturer of key machinery and equipment for the Chinese nuclear power plants. The equipment is being produced ahead of schedule. “Despite a backlog of orders at Atommash and coronavirus restrictions, the equipment for the Chinese nuclear plants is manufactured faster than set out in the contracts,” Alexey Likhachev said.

In October 2020, Atommash got started with the production of a reactor for Tianwan Unit 7. All in all, the company will produce two reactor pressure vessels complete with reactor internals and RPV heads and two sets of steam generators for Units 7 and 8. The lower halve of the reactor vessel for Unit 7 is ready — ​it could be seen in the background of the live transmission from Atommash during the kickoff ceremony.

Work on the equipment for Xudabao is also in progress. According to the latest news, the Petrozavodsk production facility of AEM Technologies (also part of Rosatom’s power engineering division) set to manufacture primary coolant pump casings for Xudabao Unit 3. Petrozavodsk quality inspectors and representatives of CNNP Suneng Nuclear Power Co. Ltd. (CSNP, one of Xudabao project owners) examined the first two spherical workpieces for the compliance with nuclear equipment standards and requirements. Each reactor unit has four primary coolant pumps.

Participants of the official ceremony made it clear that new power units were far from being the last joint project. Yu Jianfeng, Chairman of China National Nuclear Corporation (CNNC), proposed to expand cooperation in such areas as pressurized water reactors, fast neutron reactors, and refabrication of spent nuclear fuel. “We offer our Chinese partners to enter a new stage of cooperation and work harder together on fast neutron reactors and spent fuel refabrication. We believe this will help us demonstrate the world the leading role of Russia and China in promoting nuclear power and developing new nuclear technologies,” Alexey Likhachev supported his colleague.

It is likely that the cooperation will be even broader. “We are discussing China’s participation in the international consortium to build a multi-­purpose fast neutron research reactor in Dimitrovgrad,” Vladimir Putin said.

Xi Jinping proposed to promote the creation of “a fairer, more balanced and more transparent system of global energy management” and strive for innovative development. According to him, an emphasis should be made on environmental responsibility in the nuclear industry, nuclear medicine, nuclear fuel, fundamental research into key technologies, innovations, and state-of-the-art digital technologies.

A foundation for expanding the cooperation in R&D and spent fuel refabrication is already in place. Rosatom’s Research Institute of Atomic Reactors will conduct in-pile tests and post-irradiation analysis of graphite samples for China’s Fangda Carbon New Material Co. TVEL will produce fuel for the first load of the Chinese fast neutron reactor CFR‑600 and subsequent reloads during seven years. Deliveries are scheduled to begin in 2023.

China has one of the world’s largest nuclear reactor fleets. According to the IAEA, the country operates 50 nuclear power plants with a total installed capacity of 47,528 MWe. In 2019, China’s nuclear plants generated 348.36 TWh of electricity, a little less than 5 % of the total electric power output in the country. China boasts one of the most ambitious nuclear energy programs in the world. At present, the country is building 14 more power units with a total installed capacity of 13,175 MWe. The range of technologies employed includes pressurized water reactors, fast neutron reactors, liquid metal cooled reactors, and HTGRs. A tokamak is also under construction. China expects its total nuclear generating capacity to reach 70 GW by 2035. This goal is included in a draft version of the 14th five-year plan for national economic and social development (2021–2025) and long-range objectives through the year 2035.