In late October, Rosatom organized the fifth conference on the Proryv (Breakthrough) Project aiming to close the nuclear fuel cycle with the help of fast neutron reactors. Top managers and researchers from Rosatom and other companies presented the latest developments in the project and discussed priority tasks.

Alexey Likhachev, Director General of Rosatom, opened the conference reminding that Russia would have every element of technology to close the nuclear fuel cycle with a two-component approach by 2035 that provided for thermal neutron and fast neutron reactors working in a combination. As a result, nuclear generation facilities will become independent of natural uranium and follow the principles of enhanced safety, zero carbon emissions and non-proliferation. Alexey Likhachev called the task ‘tremendous.’ “Successful delivery of the project will strengthen our global leadership in nuclear power technologies and give another advantage to nuclear as a source of clean and sustainable energy. It is of strategic importance for both the Russian and global nuclear industries,” Rosatom’s Director General pointed out, noting that the Proryv Project was running on schedule.

The closed nuclear fuel cycle will be test-run at a pilot energy facility (PDEC), which is currently under construction at the Siberian Chemical Plant (part of Rosatom’s fuel division) in the Tomsk Region. PDEC will consist of a fuel fabrication and refabrication module (to be completed in 2023), a lead-cooled fast neutron reactor BREST-OD 300 (to be commissioned in 2027), and a spent fuel reprocessing module (to be put in operation in 2030).

Closing the nuclear fuel cycle is one of five national projects included in the Program for Nuclear Energy Technology and Research until 2024 approved by the Russian government earlier this year. According to Natalya Ilyina, Director for R&D Programs and Projects at Rosatom, RUB354.7 billion (USD 5 billion) will be spent on the program until 2024. The budget approved for the Proryv Project is RUB 64.2 billion (USD 900 million). 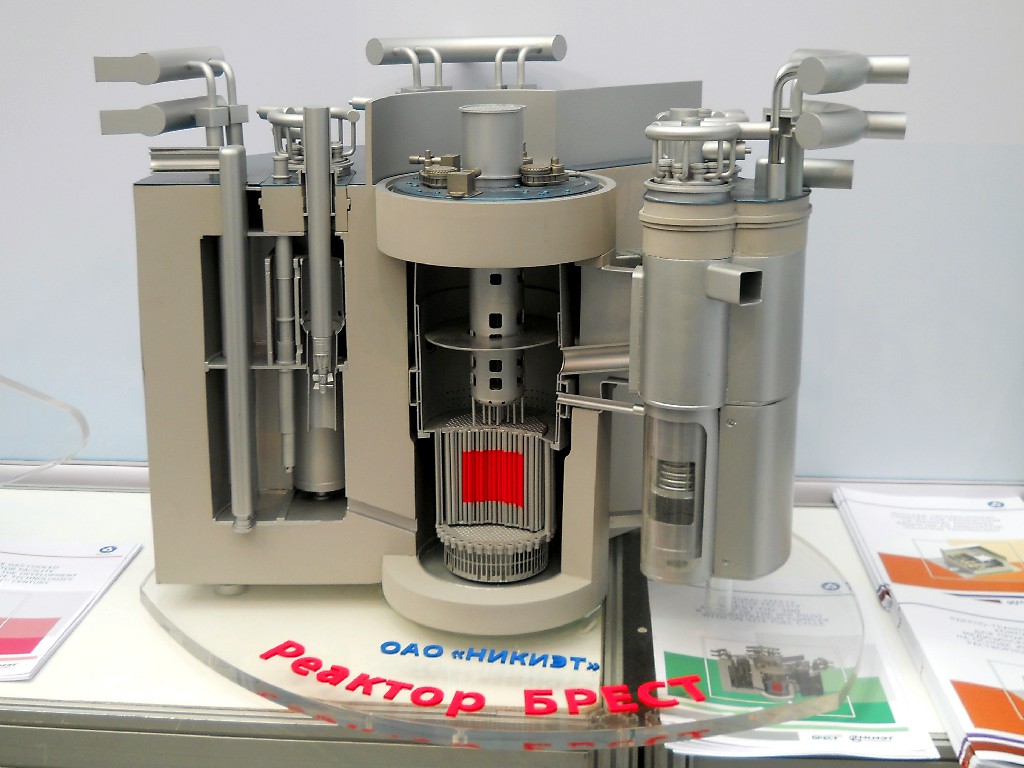 Last summer, first concrete was poured for the BREST reactor unit at the Siberian Chemical Plant. According to Vadim Lemekhov, Chief Designer of the Proryv Project, orders for BREST key components, including a steam generator, primary coolant pump, reactor pressure vessel and reactor internals, have been placed with Rosatom companies. This became possible after Rosatom obtained a construction license for the BREST reactor in early 2021. Thus, BREST-OD 300 is the first Generation IV reactor under construction in the world. It is inherently safe due to the maximum use of natural properties of its structural materials and design solutions that rely on passive safety principles. BREST uses lead as coolant. Unlike water, lead has higher boiling and solidifying points, thus helping avoid loss-of-coolant accidents, fires, chemical or thermal explosions and producing prompt neutrons for fuel breeding. The reactor has a two-loop design: nuclear fuel heats lead (primary loop); lead then flows into the steam generator and transfers heat to water in the secondary loop.

A sodium-­cooled fast neutron reactor, BN 1200M, is also developed as part of the Proryv Project. The sodium-­cooled fast reactor technology has long been tested and piloted in Russia at the Beloyarsk Nuclear Power Plant, which operates two reactors of this type, BN 600 and BN 800. As told by Sergei Shepelev, Chief Designer for Fast Neutron Reactors at OKBM Afrikantov (part of Rosatom), the main purpose of upgrading BN 1200 (M stands for ‘modernized’) was to make it competitive with other energy sources, including combined cycle gas turbine plants. Key parameters of BN 1200M will be better than those of BN 800: the upgraded reactor will have a lower specific weight; the structural and layout designs of its core for MUPN (mixed uranium-­plutonium nitride) and MOX (mixed oxide) fuels will be unified, etc. At present, engineers are working to improve some of its technical parameters and overall cost efficiency and doing necessary calculations for the design feasibility assessment.

PDEC will be equipped with on-site facilities to process nuclear fuel locally. These facilities will include two essential units, a fuel fabrication and refabrication module (FRM) and a fuel reprocessing module, both having a common radioactive waste handling system. The FRM will be the first facility in the world to fabricate mixed nitride fuel from energy-­grade plutonium and depleted uranium by means of carbothermal synthesis. Combining fabrication and refabrication functions in a single module makes it possible to use both source materials and reprocessed spent fuel from BREST-OD 300, as well as incorporate minor actinides into fuel for their subsequent transmutation.
Yuri Mochalov, Chief Technology Officer of the Proryv Project, said at the conference that the most impressive results had been achieved in the development of high-density MUPN fuel. Pilot fuel assemblies manufactured at the Siberian Chemical Plant proved to be efficient in a series of in-pile tests and post-irradiation studies. In order to enable the production of MUPN fuel, the FRM will be fitted out with unparalleled multi-­purpose units for carbothermal synthesis and fuel pelletizing and with sophisticated auxiliary equipment. “We are now assembling and installing equipment for the FRM. The pre-commissioning phase will begin in 2022 to be followed by commissioning and pilot testing the fuel fabrication line in 2023,” Yuri Mochalov explains. At PDEC, the FRM will be designed to make fuel specifically for BREST, but it can be easily modified to supply fuel for BN 1200M. The modification will follow the ‘from automation to unmanned operation’ path.

The radioactive waste handling system serves both fuel fabrication and spent fuel reprocessing and is designed to extract as many transuranium elements from liquid radioactive waste as possible. “We have built a full-size prototype of a facility for the vitrification of high-level radioactive waste from the hydrometallurgical and pyrochemical spent fuel treatment processes,” Yuri Mochalov said.

Key risks and problems of the nuclear power industry are related to the handling of irradiated nuclear fuel and radioactive waste in accordance with the latest environmental safety standards. Speaking at the conference, Viktor Ivanov, Chief Radioecologist of the Proryv Project, explained that, with fast reactors used to close the nuclear fuel cycle, radioactive waste and natural uranium would become comparable in terms of carcinogenic potential after 100 years of storage.

As noted by Dmitri Tolstoukhov, Chief Economist of the Proryv Project, sustainable and competitive development of the nuclear power industry could not be separated from closing the nuclear fuel cycle. The share of nuclear power in the Russian energy mix might grow from about the current 20 % to nearly 31 % by 2050, he cited data from the forecast made by the Energy Research Institute of the Russian Academy of Sciences. The current plan approved by the government provides for the nuclear share to reach 25 % by 2045.

From piloting to commercialization

PDEC is expected to demonstrate the feasibility of new designs and solutions, as well as the possibility of closing the nuclear fuel cycle. However, available data is sufficient to move on to developing commercial power generation facilities with fast neutron reactors (abbreviated PEK in Russian). “Proryv’s ultimate goal is to initiate massive construction of nuclear power plants based on fast reactors,” Chief Engineer of Proryv Andrei Petrenko said at the conference.

PDEC and PEK will have similar operating principles but PEK will comprise a two-unit power plant with two 1,200 MW fast neutron reactors. It is yet to be decided whether they will be lead or sodium cooled. Like PDEC, PEK can be combined with on-site fuel fabrication and reprocessing modules. The first module will produce MUPN or MOX fuel assemblies, and the second module will reprocess spent fuel to be refabricated into new fuel assemblies. It is also possible that the fuel fabrication and refabrication modules will be located away from the power plant, at Rosatom’s fuel processing sites. According to Andrei Petrenko, a concept design for PEK is ready. The work is going on to carry out a feasibility study for the initial stage of closing the nuclear fuel cycle.

An equilibrium core of fast reactors minimizes fuel burnup reactivity margins and virtually excludes reactor runaways caused by prompt neutrons, i. e., Chernobyl-like accidents. An integrated design of the reactor core excludes accidents like those occurred at Three Mile Island and Fukushima. Russian scientists have developed high-density uranium-­plutonium nitride fuel that makes it possible to build a core with the conversion ratio of nearly 1 and enable the fast reactor to operate as a breeder without a uranium blanket. Heavy liquid-­metal coolant provides for natural circulation that is sufficient to remove afterheat with the use of an air heat exchanger.