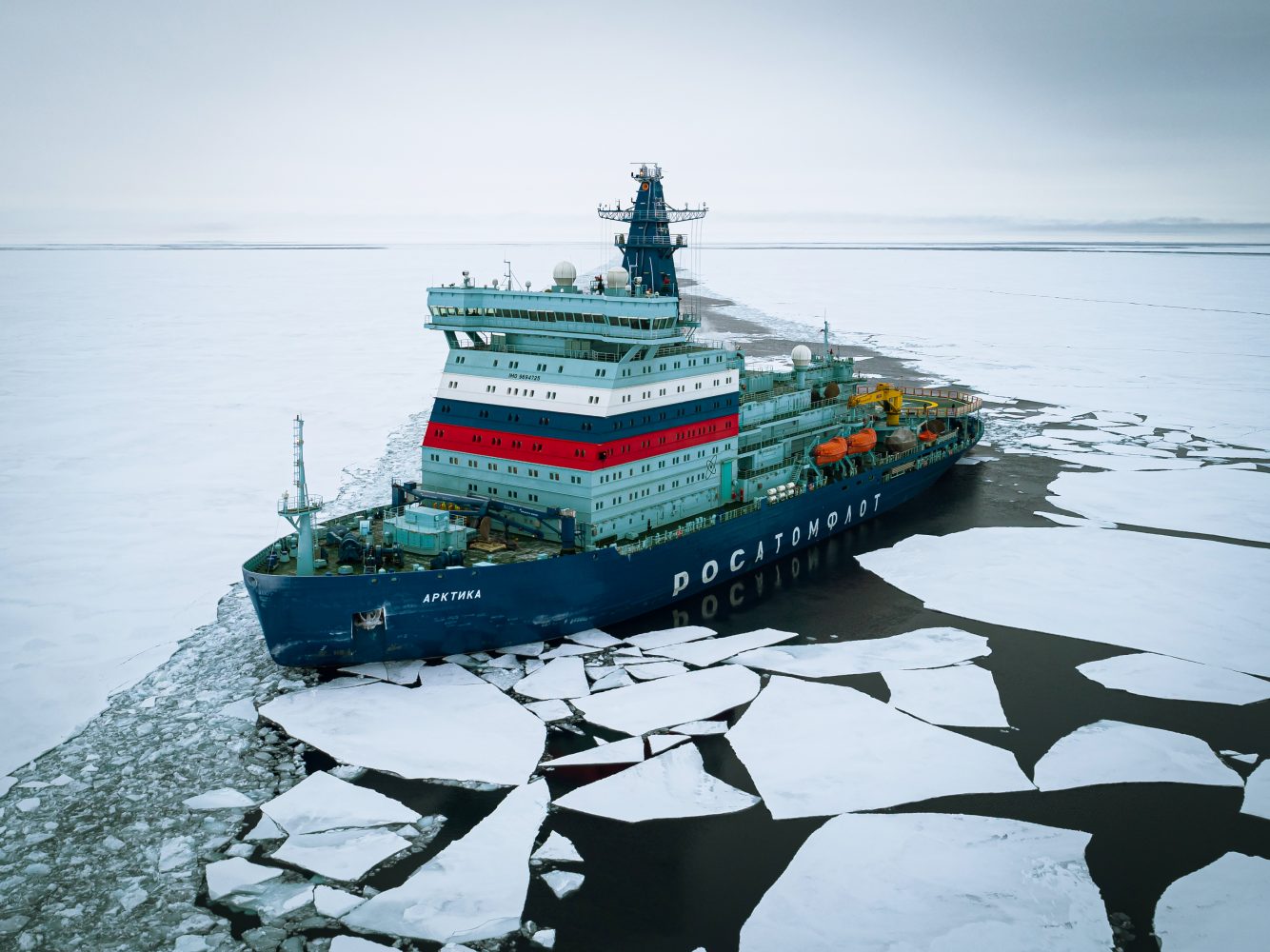 Arktika, the first Project 22220 nuclear icebreaker, was officially put into operation on October 21.

Before the commissioning, Arktika had passed the final phase, or ice phase, of sea trials. Started on September 22, the ice phase served to check the vessel’s performance in ice-covered waters. In order to make the trials as close to reality as possible, the icebreaker left Saint Petersburg for Murmansk, her port of registry, heading through the North Pole, where she safely got on October 3.

Earlier, from June 23 until September 16, the crew tested Arktika’s steam turbine plant, electric propulsion and shaft line systems, deck machinery, service systems, automatics, maneuverability and speed performance. Navigation and communications systems and a helicopter deck underwent testing too. The crew and the testing team had a chance to evaluate the icebreaker’s performance even in stormy conditions in the last days of sea trials.

Arktika was hit by a heavy storm, with the wind speed reaching 30 to 32 meters per second and waves as high as 4 meters, which corresponds to force 11 on the Beaufort scale. Waiting out the storm, the icebreaker, like many other vessels in the Gulf of Finland, was going slowly upwind because it made the motions almost insensible. “It was a violent storm, but the icebreaker made her way through it,” Chief Officer Vasily Gubkin said in an interview to the Strana Rosatom newspaper.

Since increasingly more commercial ships are escorted on the Northern Sea Route, Arktika’s services will be in high demand.

It is planned to build four more Project 22220 icebreakers. According to the project schedule, the Baltic Shipyard will commission two of them, Sibir and Ural, in 2021 and 2022, respectively. Contracts for construction of the other two vessels, Yakutia and Chukotka, were signed last August. These two icebreakers will be put in operation in 2024 and 2026.

Arktika is the world’s most powerful icebreaker for now, but in the months to come, Zvezda Shipyard in Russia’s Far East will lay the keel for the first Leader Project icebreaker, an even more powerful vessel. It will be equipped with two RITM‑400 reactors capable of generating 120 MW of shaft power. The new icebreaker will be able to travel through 4-meter thick ice, making a 50-meter wide passage for escorted ships. The plan is to build three icebreakers of the same design. The new vessel will be named Rossiya (Russia) to commemorate the world’s fourth nuclear icebreaker that operated in the Arctic in 1985–2013.

The main task of the new Rossiya will be to escort ship convoys and ensure year-round navigation in the Eastern part of the Russian Arctic. It means that, apart from safely escorting ships in ice-covered waters, the icebreaker has to ensure a commercially acceptable traveling speed of about 12–14 knots through an ice cover that is 2 meters thick on the average.

Rosatom and Zvezda signed a contract for construction of the icebreaker this April. Rossiya will be made of large pre-assembled units. Certain sections will be assembled into larger units at the factory and then delivered to the stable to be assembled. The shipyard expects this technology to reduce the overall construction time. According to the project design, the hull and topside of the icebreaker consist of 19 units. The maximum weight of a unit is 1,200 metric tons. This is the lifting capacity of the Goliath crane installed in the dry dock, in which Rossiya will be assembled.

The dry dock is a complex hydraulic structure. It is a rectangular pit that is 485 meters long, 114 meters wide and 14 meters deep. The dry dock is divided into two sections — ​in each of them, two vessels can be built at a time. Cranes are installed at its side. This is where Rossiya’s hull will be built and large-size equipment — ​two turbine plants (there will be four of them) and reactors — ​will be installed in the hull. Part of the topside will also be assembled in the dry dock.

After Rossiya is floated out, the remaining turbine plants will be installed, nuclear fuel loaded, and the topside completed.

The icebreaker is planned to be commissioned in 2027.