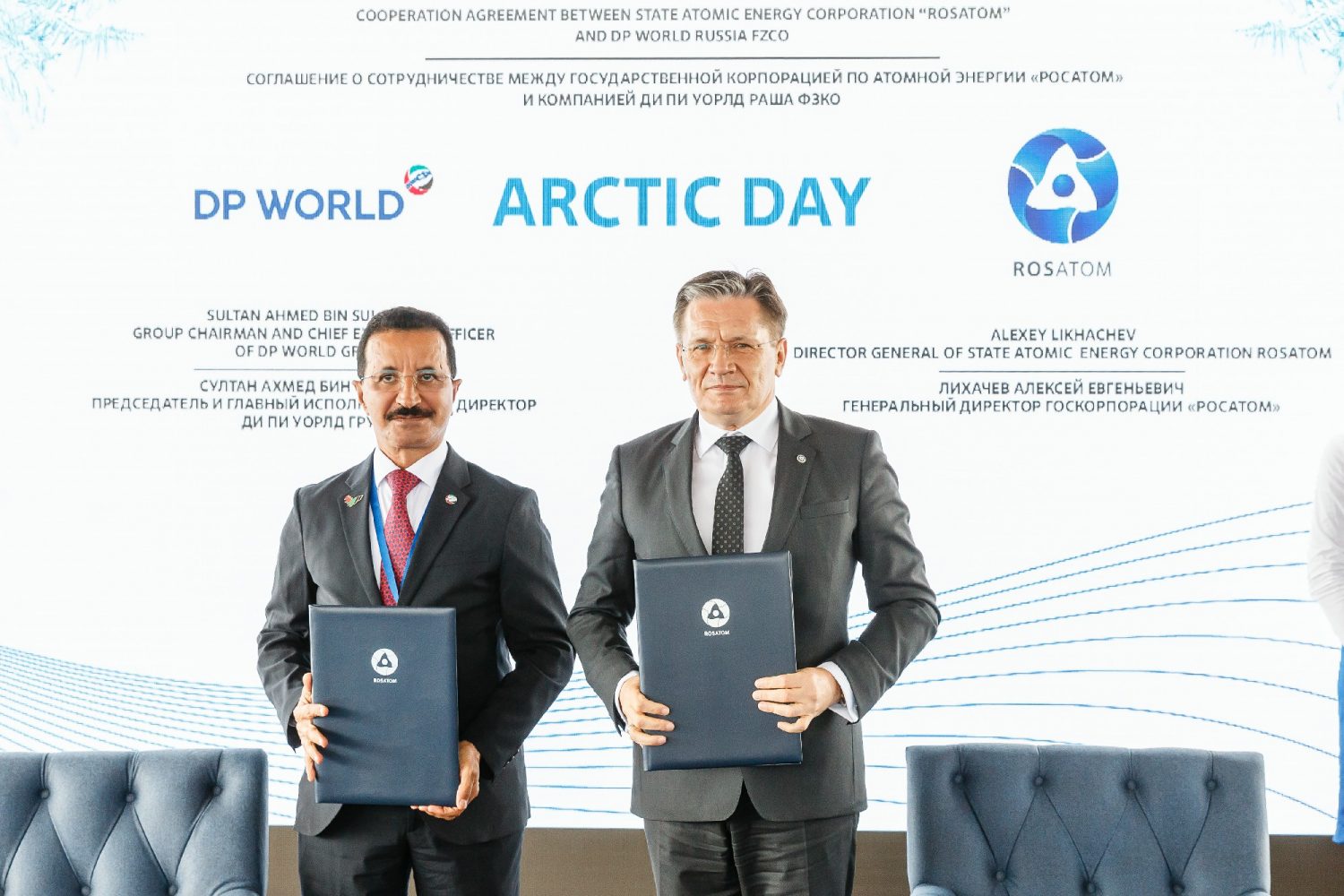 Rosatom solves two tasks in the Arctic. First, the Northern Sea Route is to be turned into an international sea lane by 2030. Second, it should be done in accordance with the sustainable development principles. As part of these plans, the nuclear corporation makes agreements with Russian and foreign partners and cleans up the Arctic.

Rosatom relies on its icebreaker fleet to develop operations in the Arctic. At a recent Arctic Day Forum held in Saint Petersburg on July 23, Rosatom’s Deputy Director General and Northern Sea Route (NSR) Director Vyacheslav Ruksha reminded of the plans to increase the freight traffic on the NSR to 80 million tons by 2024 and 110 million tons by 2030. As a comparison, the freight traffic in 2020 amounted to around 33 million tons. At present, Atomflot (part of Rosatom) operates five nuclear icebreakers and a LASH carrier. New vessels will be needed to increase the freight traffic. Five nuclear icebreakers are currently under construction, four of the Project 22220 design and one extremely powerful icebreaker of the Project 10510 design. According to Vyacheslav Ruksha, the plans are discussed to build two more Project 22220 nuclear icebreakers. A decision to build three or four LNG-powered icebreakers will be made by the end of this year. The companies transporting gas on the Northern Sea Route have plans to shift over to year-round navigation.

Rosatom signed several agreements with Russian companies operating in the region at the Arctic Day Forum. One of them is a cooperation agreement for the period until 2030 with Rosatom’s long-standing partner and a Russian mining major Nornickel (its key production assets are located on the Taimyr Peninsula). Back in the day, the development of Taimyr mineral deposits, to some extent, promoted the construction of icebreakers. First, the agreement provides for a 15‑year contract to be concluded with Rosatom, whereby Rosatom will provide escort services using its Project 22220 nuclear icebreakers. Second, Nornickel plans to build its own diesel-­electric and LNG icebreaker, which will be operated by Atomflot. Third, the parties will consider the possibility of jointly building a new icebreaker to replace the retiring Taymyr shallow-draft icebreaker and a number of port ice-breaking vessels to replace the Dudinka icebreaker operated by Nornickel.

“The challenges we face can only be dealt with through partnerships and coordinated efforts of everyone who works and invests in the region,” says Sergei Dubovitsky, Senior Vice President for Strategy, Strategic Projects, Logistics and Procurement at Nornickel.

AEON, whose subsidiary Northern Star develops the Syradasaiskoye deposit on the Taimyr Peninsula, signed a contract with Rosatom to cooperate in the Arctic navigation. The contract provides for the construction of Arc5 ice class vessels and Arc6/Icebreaker6 tugs. Arc5 and Arc6 class vessels can move through ice of up to 1 meter and 1.3 meter thick in the summer and autumn navigation, respectively.

International businesses are also interested in partnerships with Rosatom. Two agreements with foreign companies were signed at the forum.

The agreement with DP World, one of the world’s largest port operators from the UAE, having 129 divisions in 55 countries, provides for piloting container services from East Asia to Northwestern Europe using Rosatom’s transport infrastructure in the Arctic. Rusatom Cargo (Rosatom’s subsidiary responsible for freight transportation on the NSR) also signed an agreement with DP World Russia FZCO to set up a company that will deliver the pilot transit project on the NSR. 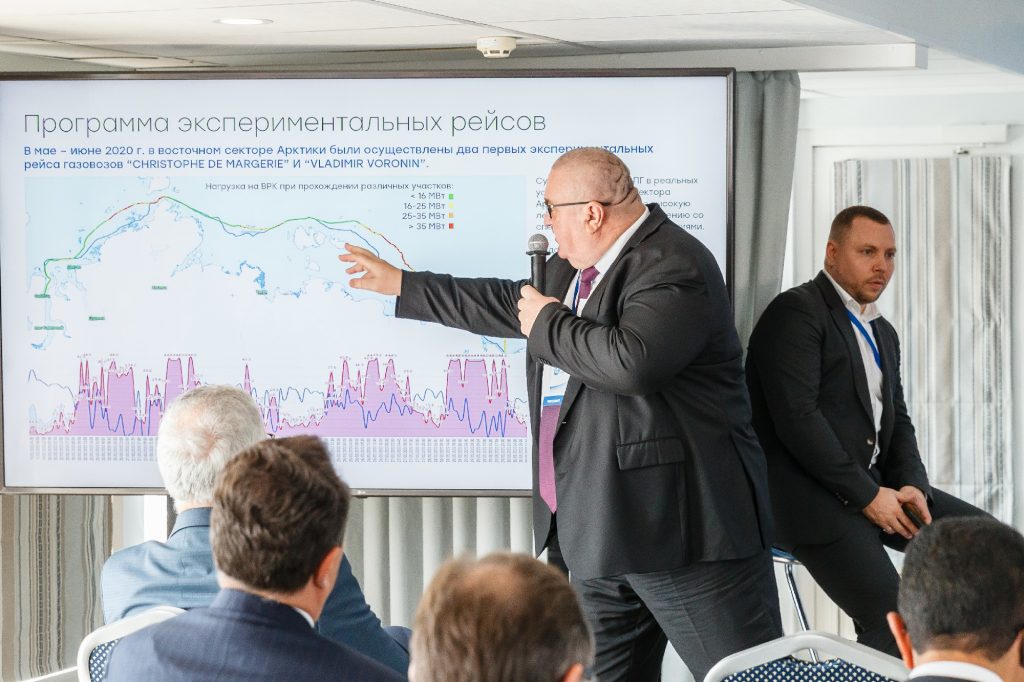 “DP World has undertaken, together with the Russian Direct Investment Fund [Russia’s sovereign wealth fund], to invest USD2 billion, and we will continue working with our Russian partners and look for the solutions that will ensure sustainable development of the Northern transit corridor,” said Sultan Ahmed Bin Sulayem, Chief Executive Officer of DP World.

The second agreement was signed with Mining Company Baimskaya (part of Kazakhstan’s KAZ Minerals). After a long consideration, the company came to the conclusion that nuclear energy is the best power supply option for Baimsky mining and processing plant that will develop one of Russia’s largest gold deposits Peschanka. It is anticipated that AtomEnergoMash (Rosatom’s power engineering division) will build four floating reactor units, three mains and one backup to be used during maintenance or fuel reloading operations. By April 2022, the companies will also sign a take-or-pay contract for the supply of electric power.

“Rosatom sees its mission in becoming a project developer and an anchor that will bring together businesses interested in the development of the Arctic region. This opens up enormous opportunities for us to establish strong multi-year partnerships,” Kirill Komarov, Rosatom’s Deputy Director General for Corporate Development and International Business, summed up.

At the Arctic Day Forum, Rosatom and Lomonosov Moscow State University Marine Research Center signed an agreement on comprehensive marine studies and environmental monitoring in Arctic sea waters. Experts will estimate the man-made impact on the environment by NSR traffic and develop prevention measures. In addition, Atomflot (Rosatom’s subsidiary operating its nuclear fleet) agreed with the Russian Academy of Sciences Murmansk Marine Biology Institute on the key aspects of cooperation, particularly on monitoring, evaluation and forecast of the impact made by maritime traffic on the environment and species inhabiting Arctic seas and adjacent waters.

Rosatom plays a central role in Arctic cleanup projects. This June, the company completed the transportation of spent nuclear fuel from the damaged depot ship Lepse. In addition, 120 out of 123 decommissioned nuclear submarines have been dismantled by now. 123 reactor compartments have been placed for storage on shore. Around 900 spent fuel assemblies have been removed from the Gremikha naval base used as a storage site for spent fuel from nuclear submarines. Damaged fuel assemblies, which prevented rehabilitation of a now-defunct spent fuel pool, have been removed from the Andreev Bay radioactive waste repository.

Thanks to Rosatom’s efforts, accumulated radioactivity in the northwestern part of Russian Arctic has decreased from 5.7 MCi to 4.94 MCi as at the end of 2020.

Rosatom supports social initiatives as well. In July 2021, the company presented the Clean Arctic project initiated by the captain of Atomflot’s 50 Let Pobedy nuclear icebreaker, Andrei Lobusov. He suggested launching a large-­scale cleanup in the region, and his idea found a receptive audience among environmental organizations.

Rosatom is the infrastructural operator of the Northern Sea Route (NSR). It is responsible for the navigation, construction of the infrastructure, hydrographic support and safety measures on the NSR in harsh Arctic conditions.