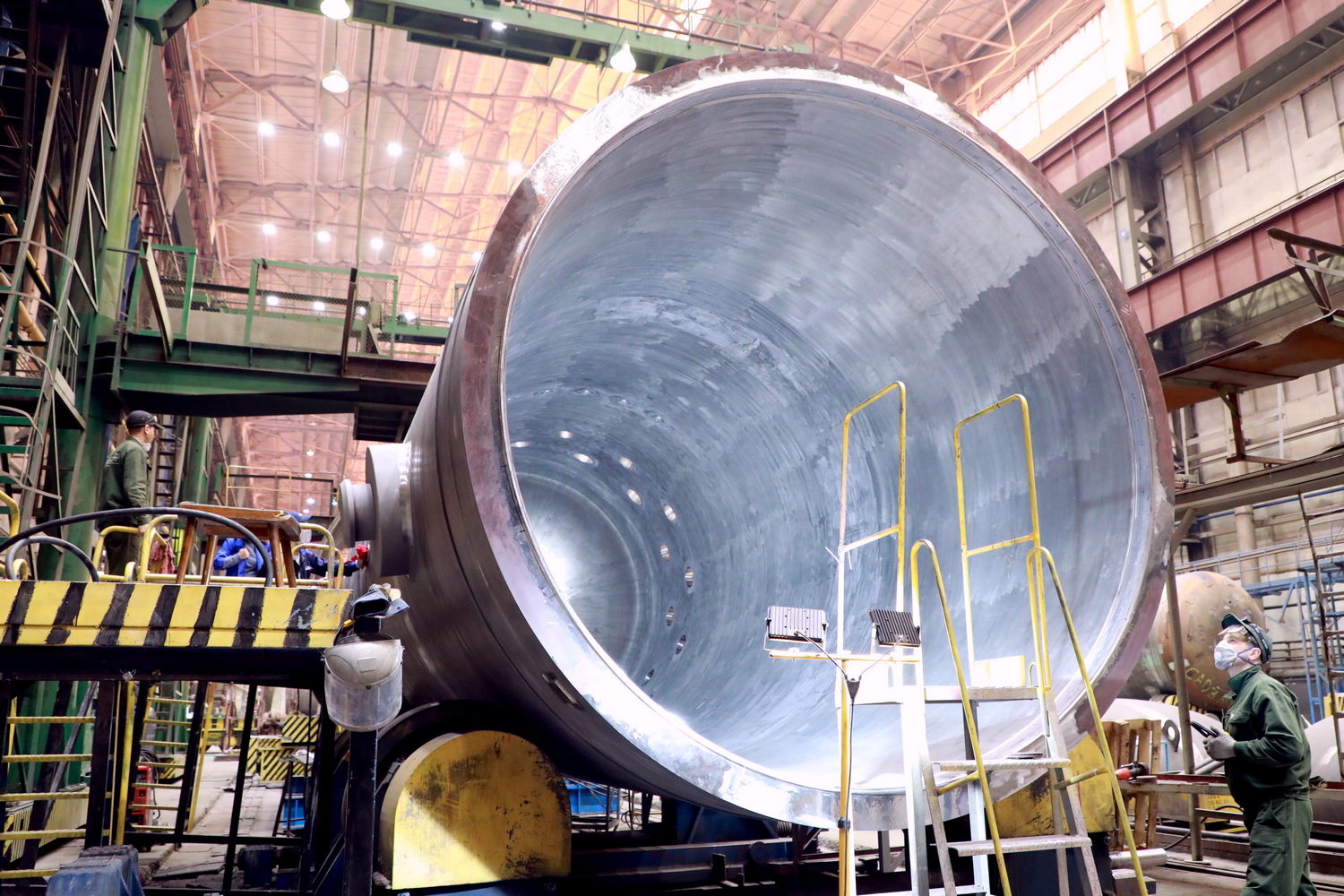 Talking about Rosatom, we cannot but mention its power engineering division, AtomEnergoMash (AEM). The group brings together Rosatom’s subsidiaries manufacturing equipment for power generation – mostly for nuclear but also heat and gas generation, as well as for hydrogen economy in the future. AEM also does shipbuilding.

AEM group celebrates its 15th anniversary in April 2021. It goes without saying that the production facilities of the group are far older. For example, Atommash, one of its key manufacturing companies, turned 45 last December.

AtomEnergoMash engineers and manufactures core equipment for nuclear power plants. The company is a single-source supplier of nuclear and turbine islands. Its product range counts hundreds of different articles.

Another AEM Group company, OKB Gidropress (OKB stands for “experimental design bureau” in Russian), engineers and upgrades nuclear power units with VVER-type reactors. The company designs some of the systems and equipment for fast neutron reactors, while reactors themselves are engineered at OKBM Afrikantov (OKBM stands for “experimental design bureau in machine-building” in Russian). The latter also develops marine reactors, small modular reactors, and auxiliary equipment.

AEM group supplies machinery and equipment designed and manufactured at its companies to all new reactors in Russia and takes part in nuclear construction and upgrade projects in other countries.

This January, Atommash (based in Volgodonsk, Russia) began to manufacture a reactor and steam generators for Unit 6 of the Indian nuclear power plant Kudankulam. As set out in the contract for Kudankulam Units 5 and 6, Atommash will manufacture and supply two VVER-1000 reactors, two sets of steam generators, primary coolant pump casings, primary coolant pipes, tanks for the emergency core cooling and passive core flooding systems, and two pressurizers. The total weight of these components is around 6,000 tons.

Also in January, Atommash completed a fit-up assembly test on the components of a multi-purpose fast neutron research reactor (MBIR), which is constructed in Dimitrovgrad (Russia). The assembled structure was 12 meters high, 4.1 meter in diameter and weighed 83 tons. MBIR is primarily designed to carry out in-pile tests on innovative materials and dummies of reactor core components.

A few days ago, PetrozavodskMash finished the production of passive core flooding tanks for Unit 1 of Kursk II NPP in Russia equipped with VVER-TOI reactors. Each reactor unit has eight tanks, each capable of holding up to 120 cubic meters of water. The production process was controlled through penetrant testing, ultrasonic examination and X-ray imaging. After production, the tanks passed a number of tests, including pressure tests at 4.4 MPa.

This March, PetrozavodskMash started to manufacture guide vanes for the primary coolant pumps to be installed at Kudankulam Unit 5.

AtomEnergoMash will also supply equipment for an onshore SMR to be constructed in Sakha (Yakutia) in Russia’s north and upgraded floating power units that will provide power to Baimsky GOK, a large mining and processing plant in the Chukotka Peninsula, Russia.

Shipbuilding is another area on which AEM focuses its efforts. AEM companies have long been producing nuclear propulsion units and other machinery for icebreakers. Here is a recent example: in April, OKBM Afrikantov started to manufacture equipment for Chukotka, the fifth out of five Project 22220 nuclear icebreakers. They are equipped with RITM-200 reactors.

Apart from Project 22220 vessels, AEM will supply equipment for the unparalleled Project 10510 icebreaker Rossiya. It will use a RITM-400 marine reactor, which is, in fact, a 1.8-fold more powerful evolution of RITM-200. Besides, AEM will supply propeller shafts, equipment for shaft lines and water propellers, and steering gear for Rossiya. Those components will be produced at AtomEnergoMash’s subsidiary AEM Propulsion.

These icebreakers are designed to ensure year-round navigation on the Northern Sea Route by 2030.

The nuclear power industry is not the only one for which AtomEnergoMash engineers and manufactures equipment. Other industries include oil and gas. In late March, a large-capacity pump for liquefied natural gas passed durability tests on a dedicated medium-to-large capacity test bench in Saint Petersburg. The test bench was commissioned in December 2021. Multi-hour tests confirmed durability and reliability of the pump and functionality of the test bench. AEM plans to use it in the future to test equipment for hydrogen economy.

AtomEnergoMash aims to expand its presence in the power and marine equipment markets. For this purpose, it builds alliances, streamlines supply chains and fits into them, improves quality, optimizes costs, and invests much effort and money into new products.